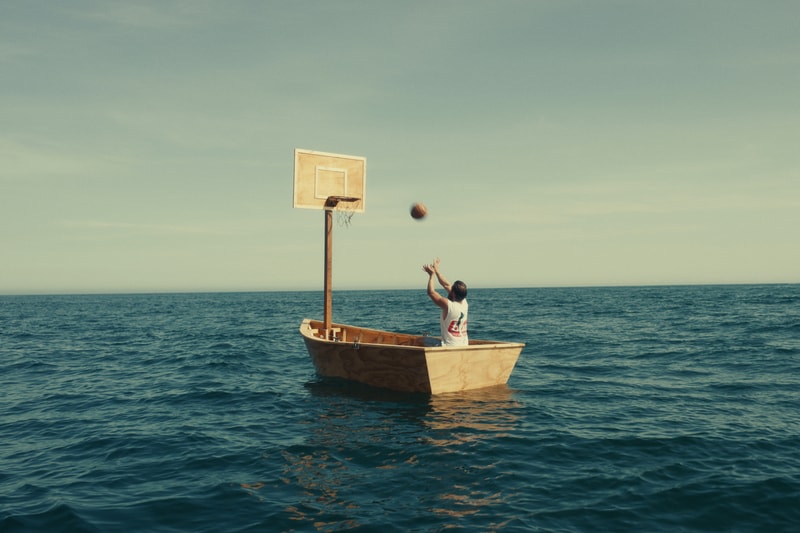 New York Sunshine has been making the most out of isolation, the contemporary art and fashion collective led by John Margaritis recently shared a new film called Repent or Perish. Set against varying locations in the east end of Long Island in New York, the four-minute video stars “Crazy Chris” who robs a muscle car and sets out on a wooden row boat fitted with a basketball hoop with a bunch of debauchery and bad decisions in between.

“The film is an allegory about running away from your problems and people until ultimately you end of completely alone. It’s a series of bad decisions that ends up spiraling out of control leaving him stranded out to sea,” said director Jordan Hall.

The 750-pound row boat itself took approximately 500 hours of labor to create. “It took us over a month and a half. Most of the stuff I’ve built or design starts as an idea that I can’t get out of my head until I can actually see it in front of me. There was no real use for it, no reason for it at all actually – I just wanted to build it,” said Margaritis to HYPEBEAST.

Hall said that once the boat was made, the crew began piecing together the rest of the film during the COVID-19 pandemic: “We knew we wanted a robbery to start the film with a bang and set CC in motion,” he said. “I was in london for quarantine and would write out the scenes in order, eventually turning it into a script and send it over to Sunshine to read through. We went back and forth on ideas, getting on the phone for hours every few days to discuss things, adding scenes or deleting them from March up until we shot in mid July.”

Watch the Repent or Perish video below and follow New York Sunshine on Instagram to catch their latest projects.