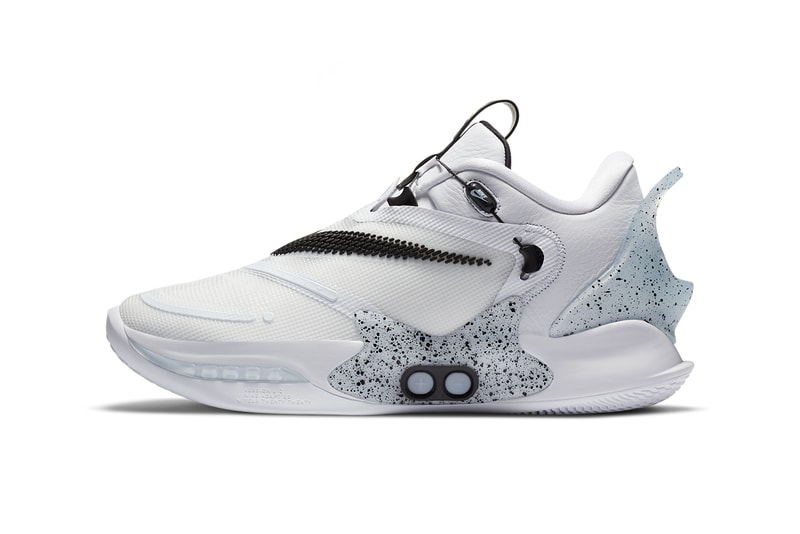 Nike Basketball has served up the Adapt BB 2.0 in a scrumptious “Oreo” colorway. Undeniably the most high-tech take on milk and cookies Nike fans have seen yet, the “Oreo” adds a healthy dose of sweet style to the Swoosh’s latest power-lacing hoop silhouette.

Uppers are constructed from supple white leather, with a synthetic white sheath covering the entirety of the forefoot. This is for more than just looks: it’s tightened and loosened by a black winch system, which itself is controlled by a small motor in the midsole. Large textured black Swooshes are splayed across the top of the foot, and smaller outlined iterations grace the medial midfoot.

Speckled grey and black accents appear on the bold heel clip and surround a duo of light-up buttons on the midsole. The wearer can change the color of these lights from their iPhone or Android device, as well as tighten or loosen the shoes by simply pressing one or the other. Of course, full control of the fit system is available through a phone app as well

From a performance perspective, a large Zoom Turbo cushioning unit is loaded in the forefoot for a responsive feel. Its placement is nodded to by an oval-shaped blue window on the herringbone outsole, and simple EVA midsole foam encourages playing on your toes.

The Nike Adapt BB 2.0 “Oreo” will release on Nike SNKRS China and Nike HK come May 23. A Nike US release will likely follow shortly thereafter, and the MSRP is set at $400 USD.

Elsewhere, check out Nike Sportswear‘s Air Force 1s and Air Max 90s from the “Home & Away” pack, both of which feature rub-off detailing.