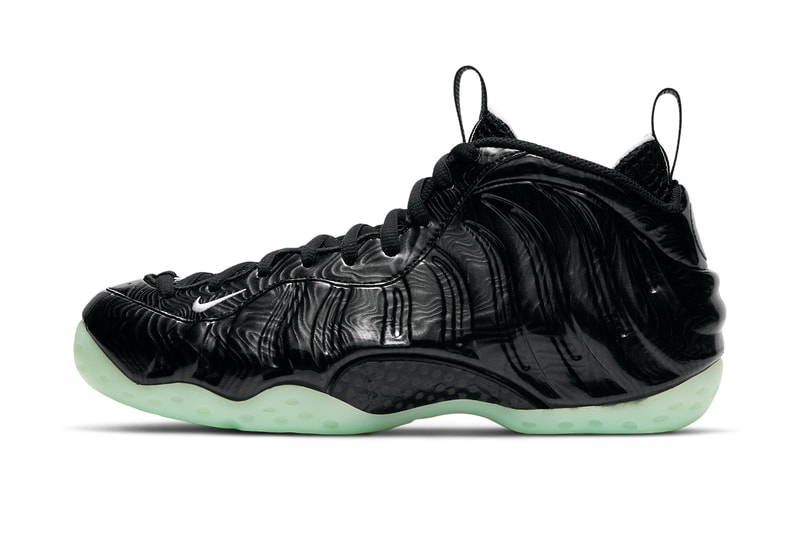 The NBA All-Star Game is set to be played in Atlanta on March 7, and although it will be spectatorless due to the continued risks posted by COVID-19, fans will still be able to get their ASW on thanks to Nike‘s wide swath of All-Star releases. Though these drops already include Dunk Highs and Air Force 1 React LV8s, the Air Foamposite One is getting in on the action with an “All-Star” makeup of its own.

Following the color palette of the other shoes it’s accompanying, this Foamposite One boasts a glossy black upper and a glowing green midsole. Though the beetle-inspired molded upper may indeed be monochromatic, it boasts a psychedelic, wavy print for a dash of clever style. There’s also a small white Swoosh on the forefoot and white striped detailing on tongue/heel tabs alike.

Silver heel badges offer a kaleidoscopic graphic that shows an All-Star Game logo and text or a Nike Swoosh depending on which way they’re viewed. Though the ASG will indeed be held in Atlanta, the graphic refer to Indianapolis — its original staging ground before coronavirus complications forced a change of plans. Black carbon fiber midfoot plates and glowing green outsoles round off the look. Of course, the Foamposite has a long history with the All-Star Game: 2012’s legendary Air Foamposite One “Galaxy” was an All-Star release.

The Nike Air Foamposite One “All-Star” will release alongside its pint-sized Little Posite counterpart sometime this spring, likely around when the game is played on March 7. The MSRP is set at $230 USD.