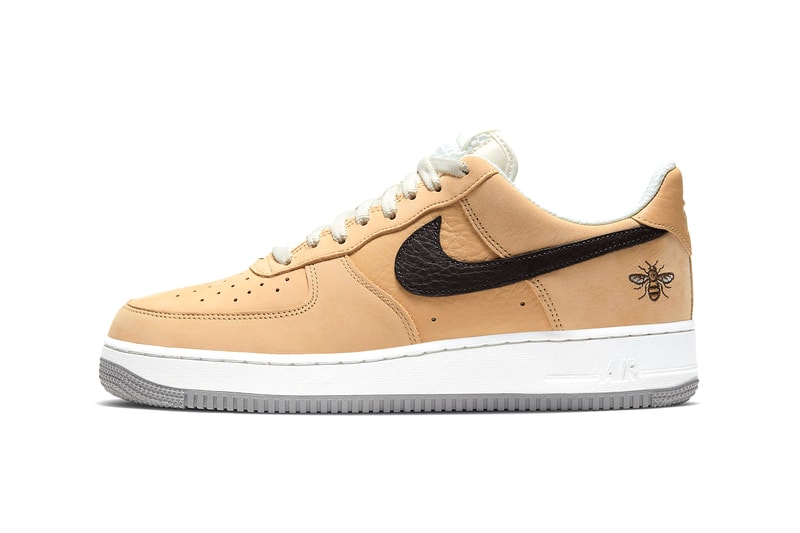 The Nike Air Force 1 has surfaced in a “Manchester Bee” rendition, nodding to the British city’s historic bee logo that has been used for 150 years.

It was supposedly designed by the architect Albert Waterhouse or one of the Italian craftsmen who laid out the flooring in Manchester’s town hall. The Manchester Bee represents Mancunians’ hard work ethic and the city being a hive of activity, and also reflects on how the city and its people have a great sense of unity.

This historical emblem has now been translated onto the AF1 and features alongside a number of other buzzy elements. For example, the sneaker sports a tan suede upper with tan tumbled leather segments in the middle and a dark brown Swoosh logo also in tumbled leather, while elements such as the tongue are made from honeycomb mesh.

Honeycomb informs the debossed pattern found on the medial heel counter, while on the lateral heel you’ll find the Manchester Bee embroidered into the side. The city’s phone code, “0161” appears on a tag on the tongue, sitting alongside tonal Nike Air branding.

Luxurious leather insoles, debossed branding on the heel, a mini Swoosh on the eyestay, a set of cream laces, and a two-tone white-gray sole unit round out the pair. Take a look at the Nike Air Force 1 “Manchester Bee” above, and expect the sneaker to drop very soon at Nike stores, its website, and at select retailers.

In other news, Slam Jam and Nike have hooked up again, this time around taking on the Dunk.