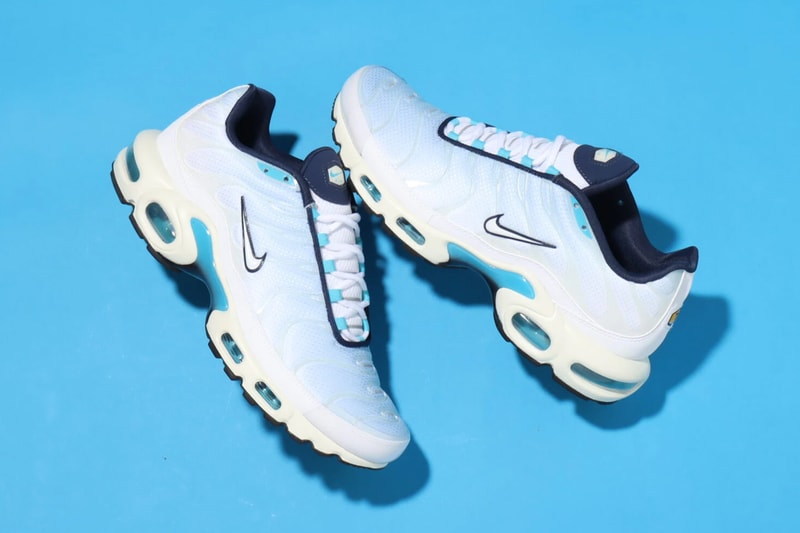 Nike‘s Air Max Plus has surfaced in a refreshing “Psychic Blue” colorway. Also affectionately known as the “TN,” the Air Max Plus is usually known for its vibrant color schemes and vivid detailing, but the “Psychic Blue” offers a much more cool-toned style that was made with summer days in mind.

White mesh uppers may appear simple at first glance, but upon closer examination their intricate detail comes to light. The palm tree-inspired wavy TPU overlays are done up in translucent fashion, and a faint gradient fade trickles down from the top half of the upper before stopping just above the white mudguard. Eyestays are done up in an eponymous “Psychic Blue” tone, with collars and tongues alike adding an air of richness to the look with dark navy shades.

Midfoot Swooshes are done up in white and trimmed with navy. Yellow TN and silver/blue Nike Sportswear badges appear on the heel and tongue, respectively. Down below, eggshell midsoles offer a tonal contrast with the upper’s white mesh and “Psychic Blue” is used once again on the midfoot shank and the Air Max units — save for the medial heel, which retains a familiar shade of yellow.

The Nike Air Max Plus “Psychic Blue” is available now at retailers like atmos, and is priced at ¥17,500 (approximately $159 USD), exclusive of tax.

For more from the Swoosh, check out LeBron James‘ LeBron 8 “HWC” — a onetime PE that’s now set for its first ever retail release.