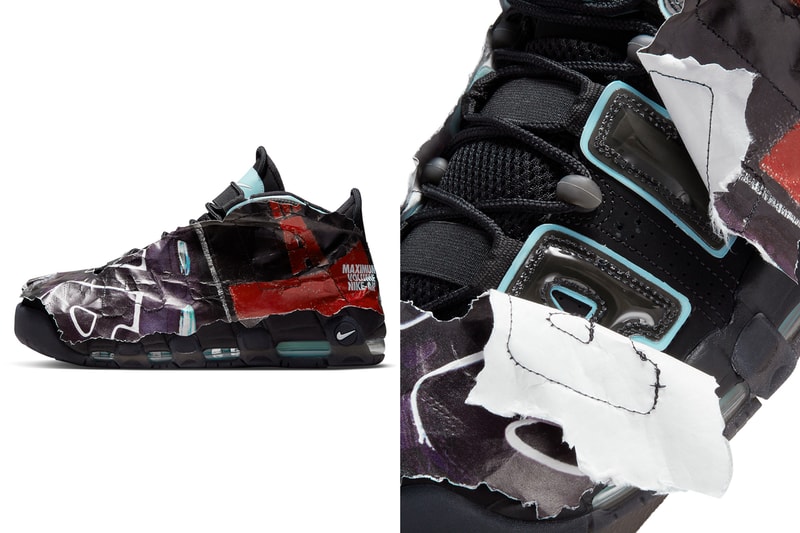 Nike does shoes, not music, but the Beaverton-based footwear behemoth is putting forth a strong claim for the “Best Wrapper Alive” title with its new Air More Uptempo “Maximum Volume.” Wrapped in vintage print ads, the “Maximum Volume” follows up other artfully-shrouded styles like the Air Force 1 “Keep ‘Em Fresh,” and nods to a memorable bygone era of Nike Basketball.

As can be seen at the tail end of the gallery above, the ad that this Air More Uptempo is wrapped in premiered just ahead of the 1996 Olympic Games in Atlanta, and includes a small photo of Scottie Pippen plus a new “Maximum Volume Nike Air” hit on the heel. Though it is indeed stitched directly onto the upper, it can be removed without damaging the base layer.

Stacking up to a full-color ad is no small task, but the rest of the “Maximum Volume” puts forth a strong effort. Uppers are made of black nubuck while signature Air Max overlays are constructed of high-gloss black plastic that’s trimmed with robin’s egg blue. Heels add a large red jelly Swoosh and an embroidered red Swoosh is present on the tongue. More robin’s egg blue makes its presence felt on the tongue badge and throughout the full-foot Air Max cushioning unit sandwiched in the black midsoles. Insoles replicate the printed graphics of the ad for a touch of hidden flair, and semi-translucent outsoles with a large red Swoosh round off the look.

At the time of writing, an official release date or retail price for the Nike Air More Uptempo “Maximum Volume” has yet to be announced. However, it’ll likely arrive sometime this spring or summer.

Elsewhere in the world of the Swoosh, take a look at the Air Max 90 “Future Is Clear.”