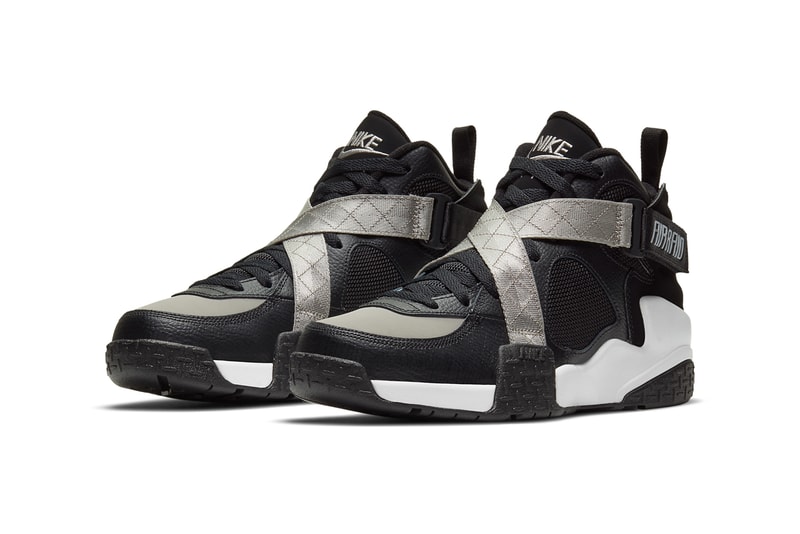 First released in 1992 and last seen in 2014, Nike‘s iconic Air Raid is set to return in its OG black and gray colorway. A Tinker Hatfield-designed silhouette known for its sturdy build, criss-crossing midfoot straps and “For Outdoor Use Only” hit on the heel, the Air Raid is a seminal piece of early ’90s Nike Basketball footwear that boasts fans as diverse as Jerry Lorenzo — who used it as inspiration for his Air Fear of God Raid in 2019 — and Pigalle head Stéphane Ashpool.

As the story goes, Hatfield originally conceptualized the Air Raid as a competitor to Reebok‘s Pump Blacktop, the first-ever sneaker specifically made and marketed for playing basketball outdoors. Nike founder Phil Knight discovered the Blacktop, and left a note demanding an outdoor basketball-centric shoe on another executive’s desk. That executive then passed the note to Hatfield and the rest was history, thanks to the shoe’s visibly tough design and a memorable commercial starring Tim Hardaway and Spike Lee. In an interesting aside, Hatfield originally wanted to call the shoe the Air Jack — because people would want it so much they’d snatch it right off your feet. Needless to say, that moniker never saw the light of day and the Air Raid was born

From a material standpoint, the Air Raid’s rugged construction was and is ideal for doing battle on the blacktop. The midfoot bolsters its ultra-tough ballistic mesh quarter with supple-yet-sturdy tumbled black leather overlays and a gray nubuck toebox serves up contrast. Throats and tongues use a similar mix of ballistic mesh and leather, all covered by the Air Raid’s most iconic detail: two gray straps that meet in the center to form an X. These are secured by Velcro anchors on either side of the collar, the lateral one of which also adds gray Air Raid branding. Also of note is that there’s no Swoosh here — apart from the aforementioned Air Raid hit, the only other branded embellishments appear via an embroidered Nike Air graphic on the tongue and a small Nike text hit on the midsole’s outrigger, the latter of which serves as an anchor point for the straps.

Heels are made of sturdy black synthetics, add a tab for ease of entry and removal and boast an embossed “For Outdoor Use Only” graphic, leaving no doubt about what the Air Raid was crafted for. Midsoles are built of white EVA foam, trim in the forefoot, high-rising in the heel and surrounded by steel-patterned black rubber creeping up from the outsole for extra durability. Finally, outsoles complete the look with a deeply grooved, simple-yet effective traction pattern and final Air Raid/For Outdoor Use Only hits.

The Nike Air Raid in black and gray has been reported to return on September 30, but this has yet to be officially confirmed by the Swoosh.