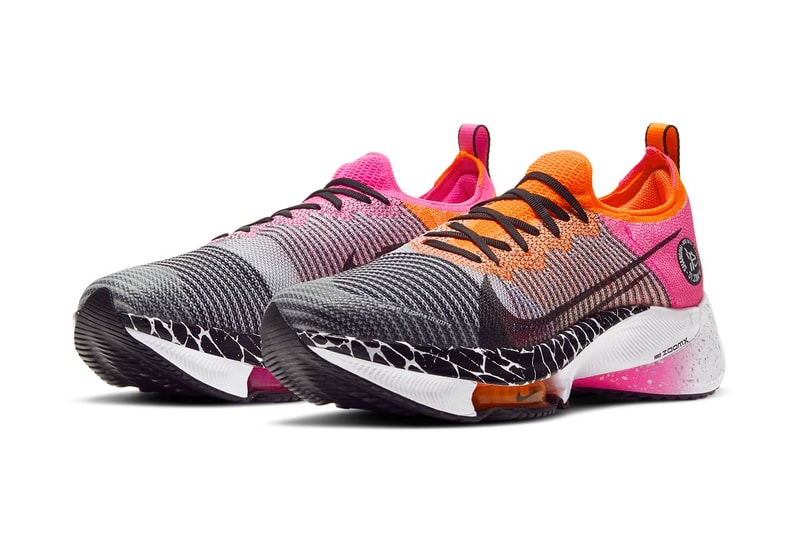 Nike Running‘s Air Zoom Tempo NEXT% has released in a bright new colorway inspired by Shanghai’s architecture. A hard-wearing takedown model of the Air Zoom Alphafly NEXT% that’s geared towards the gym and casual wear but is still more than capable of knocking out a 10+ mile run, the Tempo NEXT% is one of Nike‘s most versatile performance shoes on the market today. This “Shanghai” style might be its most unique makeup yet too, thanks to its intentionally distorted lines and branding for a nod to the city’s geometric structure and mix of old and new architecture.

Knit uppers feature wavy black horizontal stripes that run from the toebox to the midfoot, simultaneously providing structure and layered style. Large Swooshes appear on the lateral side, with wavy swooshes gracing the medial side. A strip of gray appears above each toebox, and both shoes begins to differentiate themselves on the midfoot and heel. The right shoe uses a pink one-piece tongue and heel tab plus an orange heel counter, while the left shoe offers the inverse for a yin and yang look.

Shanghai-specific badges appear on both the lateral heel and the right insole alike. Down below, a sharply-shaped ZoomX foam midsole mixes speckles, patterns and a touch of hot pink on its foam construction. All of this surrounds the forefoot’s duo of responsive Zoom Air pucks, themselves which boast striking branded embellishments. Trim black rubber outsoles complete the look.

The Nike Air Zoom Tempo NEXT% “Shanghai” is available now via Nike China, and is priced at ¥1,399 CNY (approximately $210 USD).