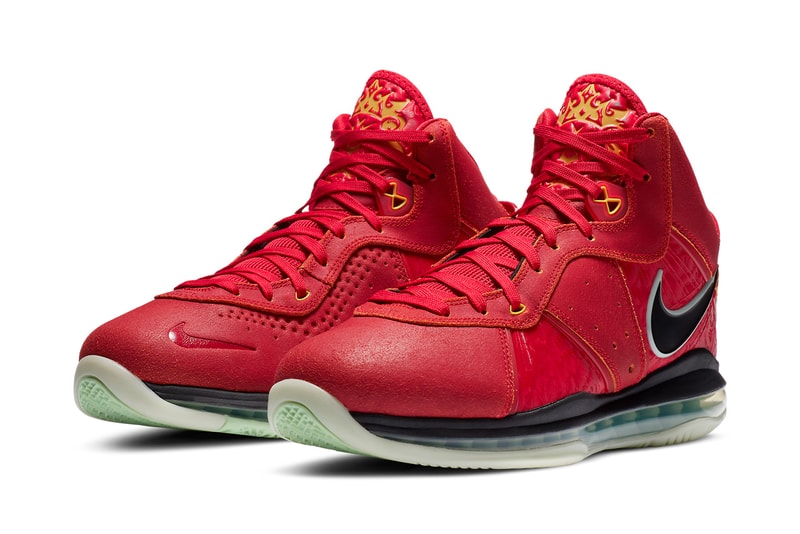 As the old Tom Petty song goes, “it’s good to be king,” and that adage rings especially true for LeBron James. He recently lead the Los Angeles Lakers to their first NBA Championship since 2010, celebrated the release of his latest signature shoe with Nike Basketball — the LeBron 18 — and is now looking back to a different era in his partnership with Nike by re-releasing the classic LeBron 8. One of the first colorways to be revealed? A ravishingly regal “Gym Red.”

Constructed of both rough-hewn leathers and sleek, Flywire-bolstered synthetics, the “Gym Red” upper is dressed almost entirely in its namesake hue. Bright yellow provides trim around many of the pieces and select eyestays while also adorning the tongue’s debossed lion logo. It also appears on the insole, thanks to a leather patch coated with a bold “Witness” graphic.

Placed behind the lateral quarter panel and swooping up onto the heel, Swooshes are done up in black with “Cucumber Calm” piping, matching the tone used on the midsole’s full-length Air Max cushioning unit. This bouncy setup is sandwiched in between black EVA foam and a glow-in-the-dark green outsole to finalize the look.

An official release date for the Nike LeBron 8 “Gym Red” has yet to be announced, but it’ll likely hit the Nike webstore and retailers like Foot Locker before the end of 2020.