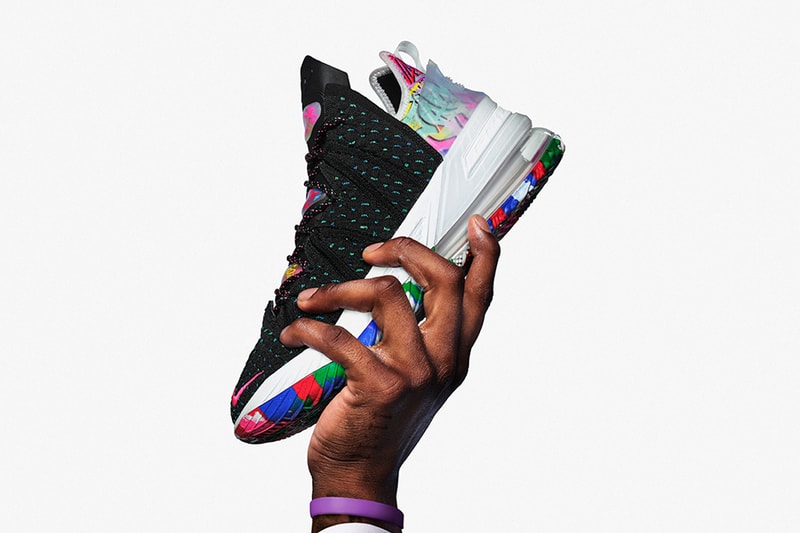 After first revealing early design sketches in July, Nike has officially begun the rollout of LeBron James’ new LeBron 18. LeBron’s signature line has long served as a testing ground for Nike Basketball’s latest and greatest tech innovations, and on the LeBron 18 designer Jason Petrie has opted for a hybrid mix of Zoom Air and Air Max to bolster LeBron’s unique mixture of speed and power. “[Nike Basketball has] combined Zoom Air and Air Max in shoes a bunch of times” says Petrie. “The last time we fit Zoom and Max together in a shoe’s heel was [2007’s] Air Force 25 — but they were stacked.” On the LeBron 18, the Swoosh’s two most famous cushioning technologies are pieced together more like a puzzle, with the Zoom Air bag wedged into the cavity between the heel’s Air Max cushioning unit and the Battleknint upper. “It’s like a 3D puzzle piece” continues the designer who’s worked with LeBron since the LeBron 7. “We wanted to maintain a consistent surface at the footbed while joining these two elements together.” Apart from its high-tech build and striking new mid-cut silhouette, the LeBron 18 is digging deep into storytelling with its first four colorways. The “Empire Jade” is inspired by the Chinese emperor’s stamp and features a special tassel. As its name indicates, the “Multicolor” provides a vibrant assemblage of hues atop a crisp black base. “Los Angeles by Day” offers a sandy upper with sunny City of Angels-centric detailing on the heel, and “Reflections” nods to significant moments in the King’s career with a special printed graphic plus gold details.

The Nike LeBron 18 “Empire Jade” will kick off the launch slate with a Greater China-exclusive release on September 21, with the “Multicolor” arriving in Greater China on September 24, then globally October 9. “Los Angeles By Day” will release globally November 6, and “Reflections” will arrive later in the year. All will be available on Nike SNKRS, and retail prices have yet to be announced.