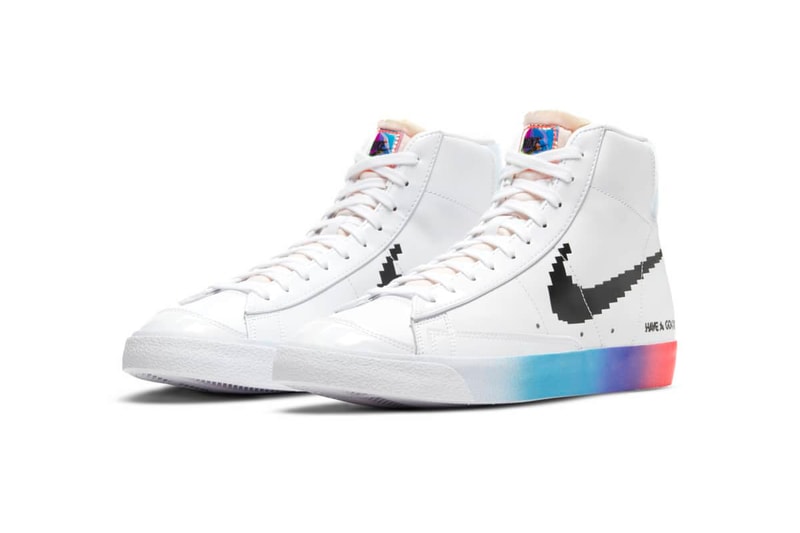 Nothing is getting in the way of Nike dropping some incredibly creative pairs at the moment, and the latest Blazer Mid ’77 and Air Max 90 “Good Game” pack is no exception.

The Blazer Mid ’77 is the star of the show here, sporting a vast mix of interesting elements. Most notable among them all is the rainbow sole unit, which hasn’t been seen since Serena Williams’ Off-White™ x Nike “QUEEN” collection. This time around, the rainbow gradient is served in white to blue, to purple, to red.

Joining this is an 8-bit video game-inspired Swoosh that’s been printed onto the white leather upper on both sides of the shoe. It’s complemented by the phrase “Have a Good Game” which is printed underneath towards the rear-quarter in a similar 8-bit font, with a smiley face replacing one of the letters. Exposed foam heels are graced with thin Nike branding, while the foam tongues now feature iridescent tongue tags. The Air Max 90 “Good Game” has a number of similar design elements. It is also made from white leather, but has a lower half that’s made from reflective metallic silver which features Nike’s logo repeated all over it in a hologram effect.

Elsewhere, the AM90 has leather 8-bit Swoosh logos on the mid-panels, an iridescent Air Max logo on the rear-quarter, raindbow gradient eyestays, iridescent tongue tags, a red-tinted Air bag, and heels that are holographic — switching between Nike Air and “Have a Good Game.” Rounding out this pair is its rainbow outsole.

Take a look at the Nike “Good Game” pack in the gallery above. The Blazer Mid ’77 retails for approximatly $125 USD, while the Air Max 90 will cost around $132 USD. They are due to release on Nike’s website on September 24.