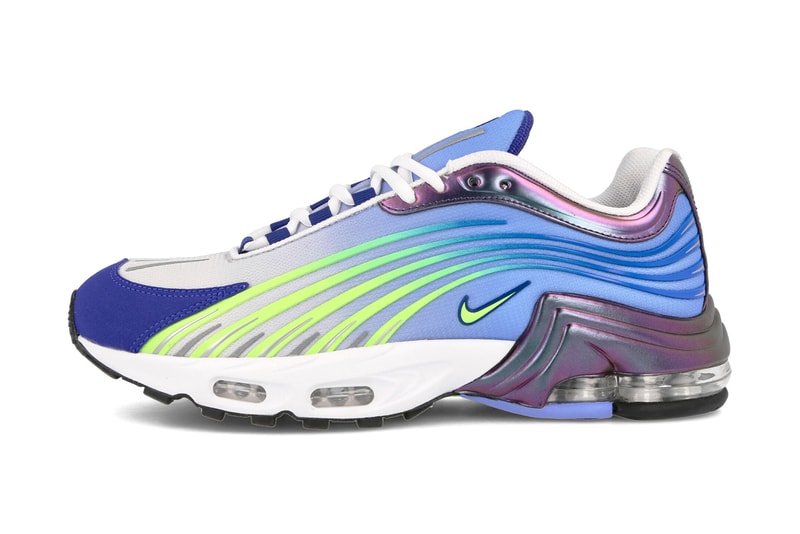 Following up a classic debut is quite a task, and Nike‘s Air Max Plus 2 had to do just that when it released in 2000 as the successor to the iconic Air Max Plus. To put it in hip-hop parlance: if the Max Plus line was Nas, the first Air Max Plus would have been Illmatic while the Air Max Plus 2 was more It Was Written — beloved of its own accord, but unable to live up to the towering standards set by its predecessor.

Lost in the jumble of Nike Shox and other turn-of-the-century Nike Running tech upon its inaugural release, the Air Max Plus 2 became an obscure favorite of die-hard Swoosh heads. However, after the Air Max Plus 3 returned to market last year the Plus 2 is set for another turn in the spotlight. Kicking things off? An OG “Valor Blue/Ghost Green-Deep Royal Blue” colorway.

Uppers are centered around two main pieces: a molded, exaggerated heel counter and wavy design lines that swoop from heel to forefoot. The former takes on a shimmering iridescent tone while the latter offers a blue-green-yellow gradient fade, and both sit atop an ombre-esque mesh upper that goes from blue to white. A large Tuned Air bag is present in the heel under the aforementioned counter, with two smaller Air units placed in the white foam forefoot. More iridescent material around the collar, a bright blue toe cap and various yellow TN hits finalize the look.

The Nike Air Max Plus 2 “Valor Blue/Ghost Green-Deep Royal Blue” is set to release via retailers like Overkill on November 19, and is priced at €179 EUR (approximately $212 USD).

If Air Jordans are more your speed than throwback Nike Sportswear styles, you’ll be pleased to know that the Air Jordan 1 “Neutral Grey” is set to return in 2021.