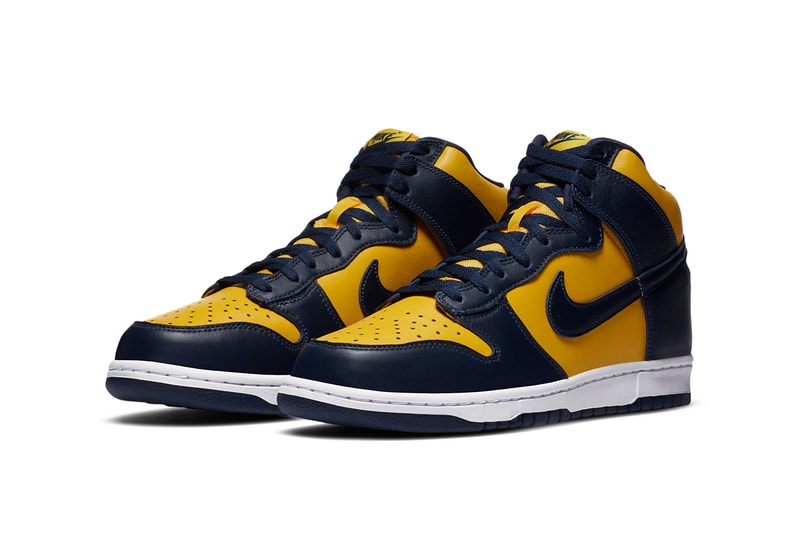 Nike Sportswear‘s Dunk High is set to return in an OG “Michigan” colorway. Following closely behind the reveal of the Dunk High “Pro Green,” the “Michigan” is a true blast from the past — one that made its debut in 1985, representing the Michigan Wolverines in Nike‘s influential “Be True to Your School” pack. The “Michigan” last released in 2016 to a vastly different market, and hit clearance racks in great numbers. However, with the Dunk enjoying a moment as 2020’s most popular Swoosh lifestyle silhouette this “Michigan” re-release is sure to serve as a celebration of 35 years of history.

U of M’s signature maize and navy blue hues are spread across the upper: the former hits quarters, toeboxes, collars and tongues, while the latter graces mudguards, eyestays, Swooshes, collar flaps, heels and laces. Both are brought together on the branded tongue tag. In true ’85 style, the whole top half is built of supple leather, save for the nylon tongue. White midsoles and navy outsoles round off the look.

The Nike Dunk High “Michigan” is set to release via Nike SNKRS on September 23, and is priced at $110 USD.

For more footwear news, take a detailed look at an ultra-rare, Kanye West-signed Air Yeezy 2 “Mismatch” sample that combinines elements of the “Solar” and “Pure Platinum.”