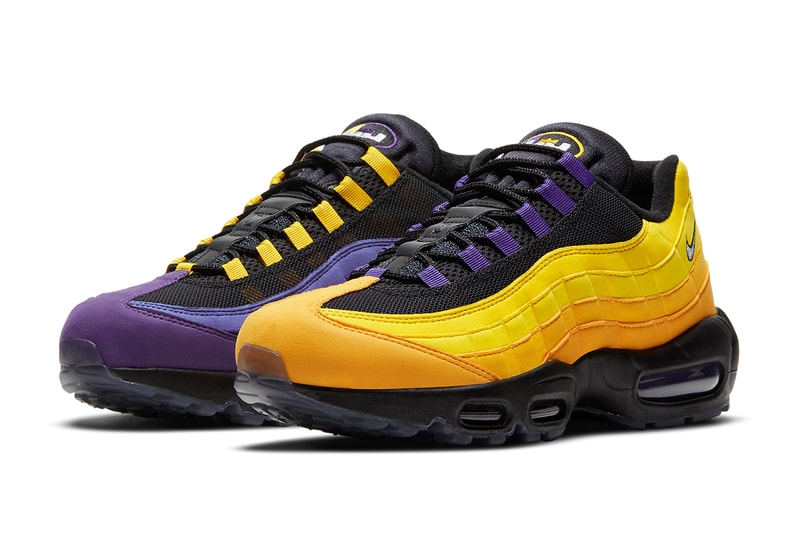 LeBron James will undoubtedly go down as one of the greatest NBA players, if not athletes, in the history of sports. And this year, Nike is taking an opportunity to commemorate “The King” and all of his greatest achievements on the basketball hardwood with this Lakers-themed Air Max 95 colorway.

Base layers are heavily dependent on that of the LA Lakers franchise colors for stylization, and use them in mismatching fashion. On the right foot, the nubuck uppers are splashed with “Court Purple” side panels, and come seated next to lighter shades of purple atop the throat and yellow accents on the lace loops and down the heels. The left foot is the exact opposite in the sense that the “Amarillo” hue does most of the talking, while purple trims play a supportive role. Instead of Nike logos on the tongues and footbeds, the Swoosh team calls upon the four-time champion’s crown logo. Additionally, the leather overlays down the throat split between debossed furnishings of “2” on the right and “3′ on the left to nod to his jersey number.

Moving downward, the midsoles are given a stealthy aesthetic and inject purple-colored Air units on the left side and yellow on the right. Listed out on the treading are the kid from Akron’s NBA accolades such as his championships, scoring titles, Olympic gold medals and more.

Check out a detailed look here above, and note that these will likely be dropping as a LeBron Watch release on March 30, 2021 for $180 USD via Nike.