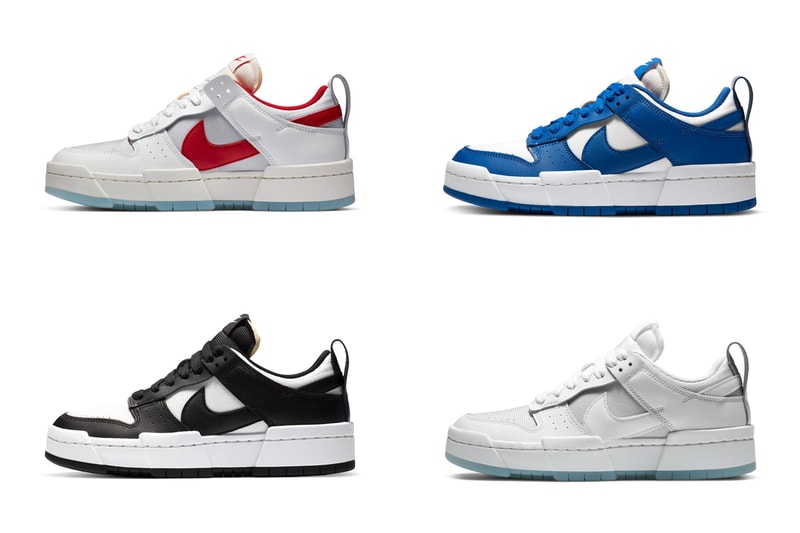 Nike Sportswear has introduced a new take on the beloved Dunk Low dubbed the Dunk Low Disrupt. With revivals of styles like the “Plum,” the “Samba” and the full “Team Tones” pack, 2020 has been a bountiful year for the iconic silhouette, and the Disrupt aims to bring the Dunk into the future with a conceptual-yet-classic build.

A women’s exclusive, the Dunk Low Disrupt takes visual cues from ’80s Nike Basketball shoes like 1984’s Air Train, combining exaggerated tooling with a slimmed-down base layer for a look that’s equal parts blocky and sleek. It’s made of mesh, bolstered with leather overlays and Swooshes, adds exaggerated heel tabs for ease of entry and removal and features an exposed foam tongue. From a colorway standpoint, it’s set to debut in white/red with an eggshell tongue that adds Tom Sachs-esque flair, a white/blue that calls to mind images of the Dunk Low “Kentucky,” a crisp white/black and a stark white/grey.

Of course, the Dunk is no stranger to women’s-exclusive makeups. The Disrupt is the latest in a long run of ladies’ releases like UNDERCOVER’s Dunk Sky Hi and sacai’s Dunk Luxe — and like its predecessors, it views the Dunk as a customizable, adjustable, free-spirited blank canvas.

Look for the Nike Dunk Low Disrupt to release on Nike SNKRS September 4. A MSRP has yet to be announced.

For more altered takes on Nike and Jordan Brand classics, check out the Air Jordan Reign — a combination of the Air Jordan 13 and VaporMax 2020 — in a new “Ash” colorway.