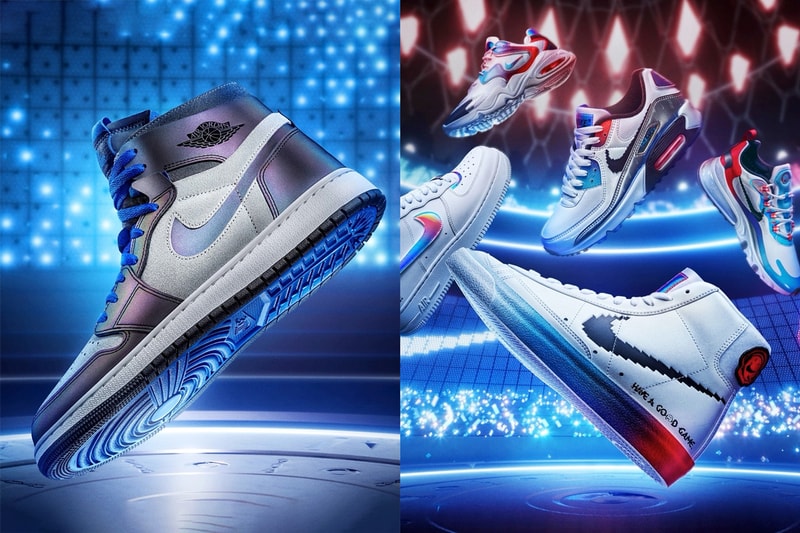 Ahead of the League of Legends World Championship later this month, Nike has released an extensive footwear and apparel collection designed with gamers in mind. Ranging from digital-printed Nike Sportswear sneaker silhouettes to special Air Jordan 1s, team jerseys for four Chinese LoL outfits — Top Esports, JD Gaming, Suning and LGD — and a full set of casual apparel, the offering is fan service for hardcore gamers and Swoosh aficionados alike.

Jordan Brand only adds a single sneaker to the mix — an Air Jordan 1 High Zoom — but it’s arguably the collection’s best. Done up in white with black and iridescent, hi-vis reflective purple accents, it’s said to be inspired by the League of Legends championship trophy, features an indented Swoosh and is completed by a graphic that nods to the Summoner’s Rift map on the right tongue.

On the other end, Nike has served up a whopping seven sneakers for the capsule: the Air Max 90, Blazer Mid ’77 Vintage, Air Force 1 Low, Air Force 1 High, Air Max 270 React, Joyride Dual Run 2 and Air Max 2X. Each differs slightly in embellishment, but all feature details like pixelated or iridescent Swooshes, gradient hits, dashes of metallic material and a “Have a Good Game” tagline, a digi-fied version of the classic “Have a Nike Day” slogan.

All four jerseys feature intricate prints and team-specific graphics, plus a moisture-wicking Dri-FIT build and a loose waist designs so players don’t feel “restricted” when the games get intense and they lean further forward in their seats. There’s also “Conquest” bomber jackets. Rounding things off are hoodies and tees with digital Swoosh hits and other gamer-centric adornments.

Release dates have yet to be announced, but the collection could well release around the League of Legends World Championship later this month.