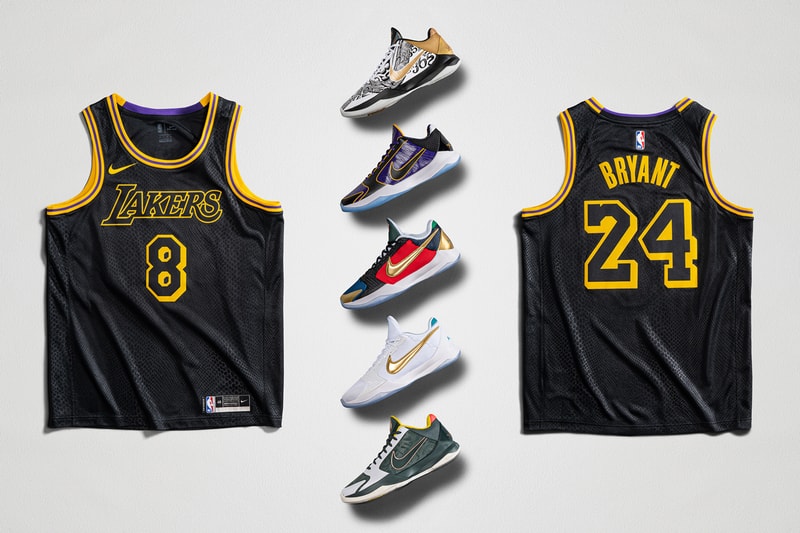 Kobe Bryant‘s tragic passing in January sent shockwaves through the world of basketball that are still palpable today, and now Nike is set to pay homage to the man they call Mamba with a special set of footwear and apparel for the first-ever “Mamba Week.” The festivities in honor of the late, great Los Angeles Lakers guard will consist of five takes on the Kobe 5 Protro — three in-line styles and two UNDEFEATED collaborations — plus a special snakeskin-printed jersey that combines his two numbers, #8 and #24. Leading things off for the five-pack of Kobe 5 Protros is the “Big Stage.” A black, white and gold color scheme with intricate lasered detailing, the “Big Stage” pays homage to Kobe’s fifth NBA championship and his accomplishments in the 2009-10 season. Next up is the “5x Champion,” another nod to title-winning glory. Using a purple, gold and black color scheme with sleek details, it nods to the bespoke jackets Jeff Hamilton crafted for Kobe after his second and third Larry O’Brien Trophies. Rounding off the in-line releases is the “Girls EYBL,” a scaly green, gold and white style inspired by Greek mythology’s Medusa and her ability to freeze opponents with a single stare. Moving to the collaborative front, longtime Nike Basketball partner UNDEFEATED has produced a duo of styles dubbed the “What If” pack. Kobe was drafted 13th overall by the Charlotte Hornets in the 1996 NBA Draft, so one of the “What If” styles is a loud assemblage of colors associated with the 12 teams that passed him up. A second style is more Hornets-centric with small teal accents. Both pairs use gold embellishments for a direct salute to Kobe’s work ethic and championship greatness. Finally, a Black Mamba-inspired Los Angeles Lakers City Edition jersey offers a faux-snakeskin print, 16 stars running down its sides and a scoop neck that was present on the “Showtime” Lakers uniforms. The meaning runs deep, as this style of jersey was originally co-designed by Kobe himself in 2017.

“Every game, I write on my shoes, ‘Be Legendary,’ which is what Kobe signed on my shoes back in 2016,” said Phoenix Suns guard Devin Booker. “He’s had an impact on my life that no one’s ever had, and probably no one ever will have again. He taught me to ask myself, ‘What am I doing here if I’m not trying to be the best at it?’ That not just a basketball quote. That’s a life quote for me.” New York Liberty guard and fellow Bryant protege Sabrina Ionescu chimed in as well, saying “The beauty of basketball, for me, is that it’s a sport you can never perfect. What made Kobe great was that he wasn’t scared to try new things, because that risk of failure is where you grow. Kobe tried to perfect everything about his game, from the way he played to the way he approached the game.”

Nike Basketball’s Mamba Week slate of releases will begin on August 23 with the release of the “Big Stage.” Both the “5x Champion” and special jersey are set to follow on August 24. Rounding things off are UNDEFEATED’s “What If” pack on August 27 and the “Girls EYBL” on August 29. All items will be available on Nike SNKRS, and retail prices have yet to be announced.