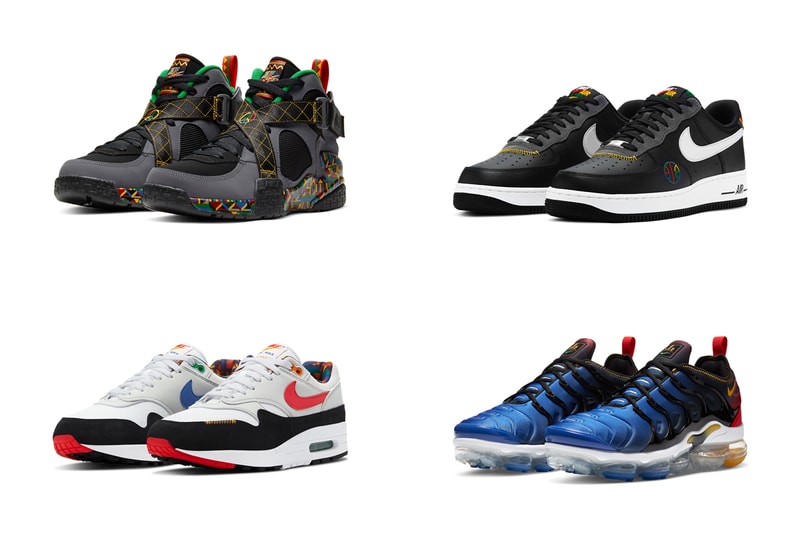 Among Spike Lee‘s many star turns with Nike and Jordan Brand, one of the most notable is his “Live Together/Play Together” commercials from 1992. Over the series of three commercials, Lee schools streetballers from opposing teams on unity, leads a famous “I got skeels!” segment with Tim Hardaway and even touches on the necessary art of trash talking. Each ad was centered around the Hardaway-endorsed Air Raid, so now Nike Sportswear is saluting the commercials by bringing back the OG Air Raid “Urban Jungle Gym” alongside fresh takes on the Air Force 1 Low, the Air Max 1 and the Air Vapormax Plus.

No matter if you choose to call it “Live Together/Play Together” or “Urban Jungle Gym,” the Air Raid in question was known for its vibrant patterns, vivid piece symbols on the upper’s criss-crossing straps and striking colorblocking. All those details return here, and also serve as inspiration for the other three silhouettes in the pack. The low-cut Air Force 1 adds a similar pattern to its heel and a basketball graphic on its lateral forefoot — all atop a black leather base — while the Air Max 1 offers a more airy (pun intended) look by adding a vivid red Swoosh and a printed collar liner to its white, gray and red assemblage. Last but not least, the modern-day Air VaporMax Plus uses a blue-to-red gradient fade inspired by those who hoop from sunup to sundown before finalizing its look with dashes of yellow plus a clear VaporMax cushioning unit.

The Nike Sportswear “Live Together, Play Together” pack is available now at retailers like Foot Locker, and will will release via Nike SNKRS on December 10. MSRPs range from $110-$200 USD.

For more Swoosh news, check out the Air Force 1/1, a completely customizable style with interchangeable panels atop a Velcro base.