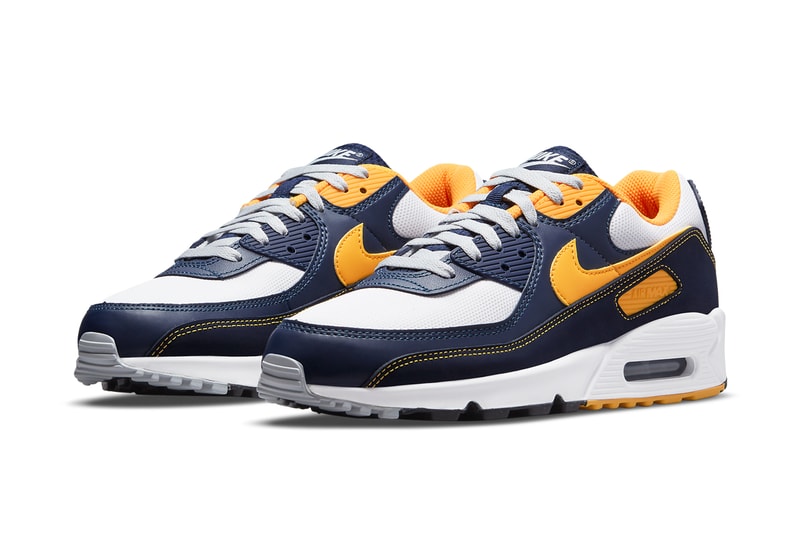 Michigan Wolverines fans might be downtrodden after their #1 seed men’s basketball team recently fell to the UCLA Bruins in the Elite Eight, but Nike is offering the Ann Arbor faithful a ray of sunshine with a new Wolverines-colored Air Max 90. Somewhat reminiscent of 2016’s Air Jordan 4 “Dunk From Above,” this new AM90 boasts a “White/Midnight Navy/Obsidian/University Gold” palette and is loaded with compelling details.

Uppers are composed of a crisp white jersey mesh that’s bolstered by navy leather mudguards and midfoot pieces. Each of these pieces supplies unique contrast stitching: the mudguard is accented by maize stitching and the top overlay shows off obsidian details. More maize is present on the midfoot Swoosh and “window” detail, while eyestays are split between maize and navy.

Rubberized heel badges combine maize, navy and white, while navy tongues are made of their own jersey mesh. More branding arrives via a white and navy Nike Sportswear tongue tag and a maize spellout on the navy insoles. Pure white midsoles with a navy Air cushioning unit and multicolored outsoles complete the look.

This Air Max 90 is available on the Nike webstore now, and is priced at $120 USD.

For more from the world of the Swoosh, get a look at the women’s Dunk Low “Green Glow.”