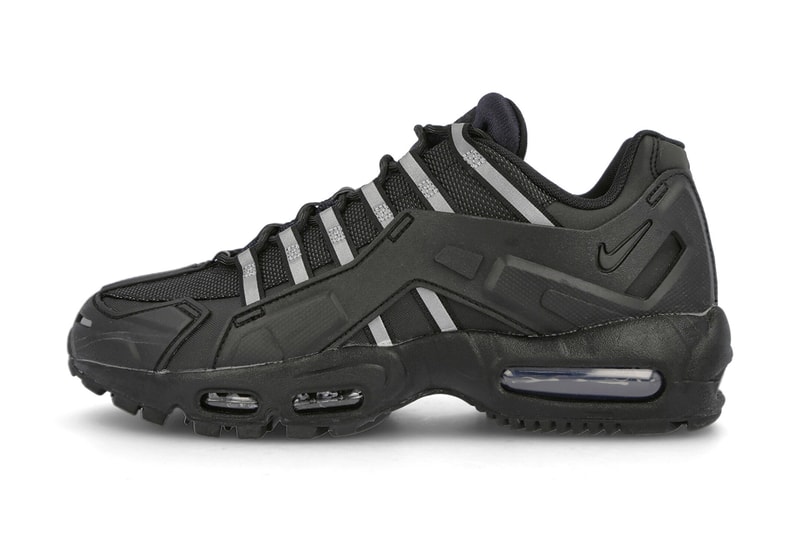 The Nike Air Max 95 is a seminal classic, one which was designed by Sergio Lozano in 1995 and has since become a staple in the sportswear giant’s footwear catalog. Despite various colorways and interpretations, the pair is seldom sought-after unless when it’s in its original form — or if it’s been given the NDSTRKT makeover.

As previously seen with the inaugural Nike Air Max 95 NDSTRKT in the OG “Neon” colorway, the sneaker became an instant hit thanks to its combination of classic styling and contemporary tooling. Much like the first colorway, this triple black offering sports a familiar AM95 base with tweaks to the upper and sole unit, most notably featuring a close-weave mesh and water-resistant synthetic textile upper alongside a black Swoosh-adorned rubberized overlay.

Underneath the geometric overlay are six silver-toned webbing stripes that act as the eyestays for the rope laces to weave through. Traditional elements such as the heel detailing remain intact, as does the branded roundel badge on the tongue. However, while the toe box may maintain the original shape, it too has been beefed up with NDSTRKT tooling.

Lastly, the EVA midsole is equipped with Air bubbles at the forefoot, mid-section, and heel for all-around support, while a grippy outsole rounds out the shoe’s look.

In case you missed it, here’s your best look yet at the Tom Sachs x NikeCraft Mars Yard 2.5 featuring an ACG sole unit.