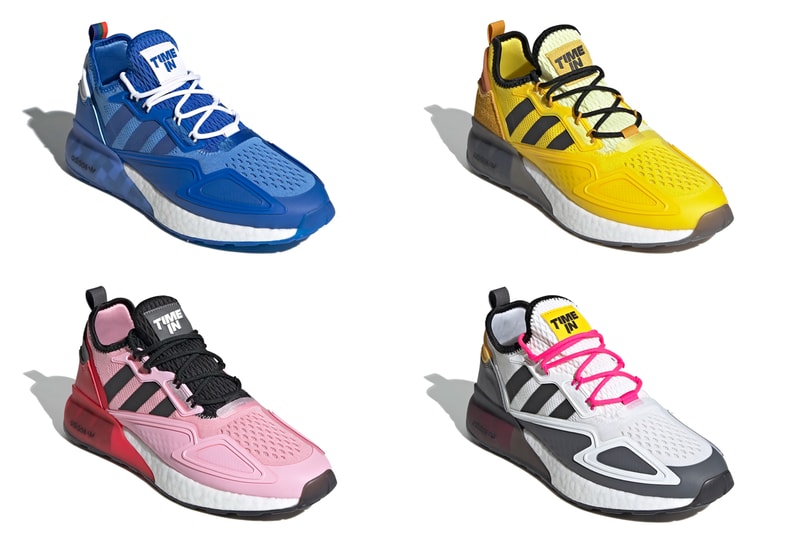 Richard Tyler Blevins — better known to his legions of supporters as Ninja — and adidas Originals have readied a four-shoe ZX 2K Boost collection. Encouraging its wearers to “never settle,” the offerings serve as a capstone to a busy year for Ninja and adidas that saw the release of collaborative Superstars, Nite Joggers, ZX Torsions and multiple pieces of apparel.

Each of the four pairs boasts a full-foot white BOOST midsole plus Ninja’s “Time In” branding on the outer tongue and a cartoon ninja graphic on the inner tongue. A bold blue and white pair provides hues familiar to any Ninja fan and also brings extra flair by way of a multi-colored heel tab plus a patterned graphic on the midsole’s heel casing. Next up is a pair that blends multiple shades of yellow with black accents for a look that’s part game-ready and part Kill Bill. The penultimate style is a bubblegum pink with rich red accents toward its heel and touches of black detailing. Lastly, a simple white and black iteration is given some flair with yellow tongue and heel detailing plus pink laces.

All four Ninja x adidas ZX 2K BOOSTs will release on the adidas webstore come December 6. Each is priced at $150 USD.

For more from the world of the Trefoil, check out a special UltraBOOST DNA inspired by the 40th anniversary of Terry Fox’s Marathon of Hope.