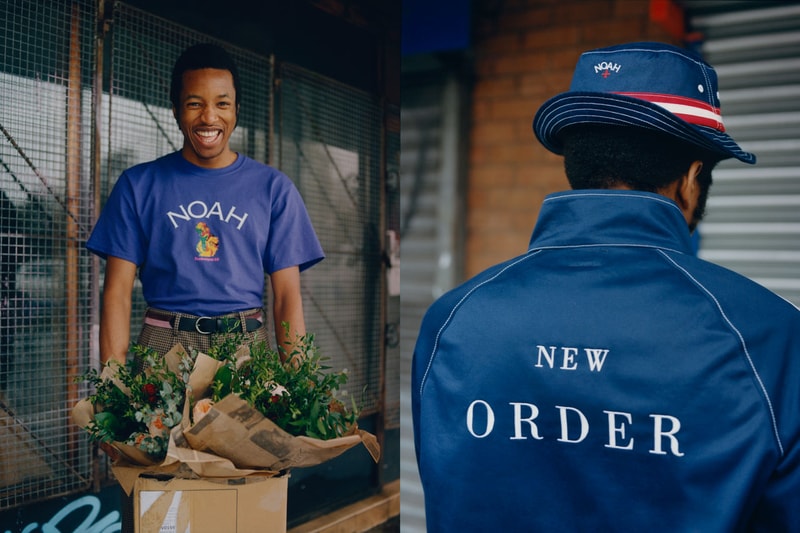 As an extension of its deep love for New Order, NOAH has cooked up an extensive collaboration with the pioneering British band. Drawing from New Order‘s back catalogue of pioneering albums and singles, the joint effort mixes NOAH’s preppy inclinations with New Order’s moody oeuvre to great graphical effect.

Despite the conspicuous absence of Power, Corruption, Lies — to be fair, perhaps the most common New Order reference — there’s plenty of commemorative artwork to chew on, including several drawn from Peter Saville‘s other cover designs. Technique, for instance, graces a co-branded tee and hoodie, the Thieves Like Us single artwork is partnered with its Giorgio de Chirico inspiration and the band member photos from Low-Life are all arranged atop a monochrome shirt.

Elsewhere, there’s a variety of experiments with text that aren’t unlike Saville’s minimalist Movement sleeve; in fact, “Truth” and “Denial” from that album are combined into one stylized shirt design, complete with production credits. Inimitable singles like “The Perfect Kiss” and “Temptation” are given similar treatment, rendered matter-of-factly atop rugby shirts and sweaters. The accompanying accessories take things a step further, yielding “The Perfect Kiss” gum, “Truth Denial” soap and even a NOAH x New Order maglight.

All of the New Order goods will arrive on HBX’s site, NOAH’s web store and physical locations March 25.

In the meantime, NOAH is preparing something special for Union LA’s 30th anniversary.