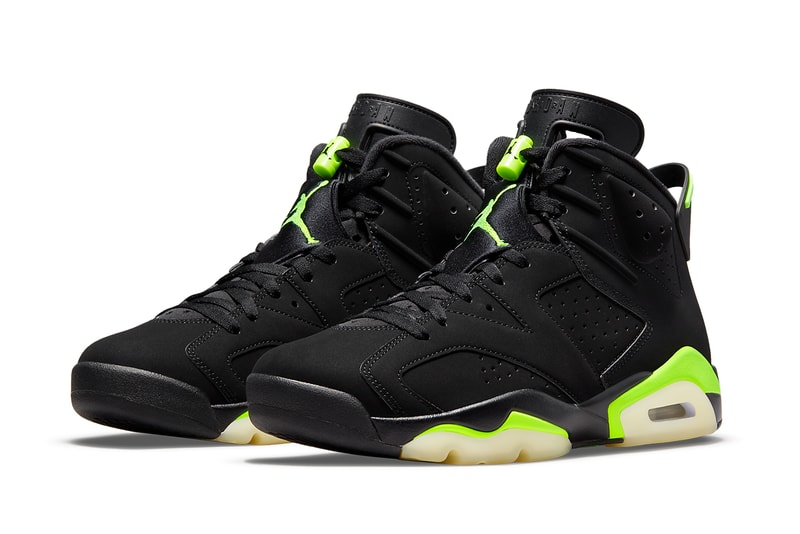 The Air Jordan 6 — a popular silhouette within the Jordan Brand family that was designed by Tinker Hatfield — is on the verge of having quite the exciting year of releases in celebration of its 30th anniversary. In the pipeline, the model will be releasing a brand new collaboration with Travis Scott, a bring back of its “Midnight Navy” offering and an “Electric Green” makeup, the latter of which has just surfaced by way of official imagery.

One of the reasons that footwear fanatics will find this specific iteration enticing is because it resembles that of an Air Jordan 6 “Oregon Ducks” PE that surfaced in 2018 and was spotted on court by one of the NBA‘s sneaker kingpins PJ Tucker. The high-profile nubuck upper and tongues are deluged in a solid black, but get enlivened with titular neon blasts atop the Jumpman symbols embroidered into the middle of the throat, lace toggles, insole branding and heel counter arches. Tongues and lower heels also come dressed with Jordan branding, but both of these are blended in with their stealthy backdrops.

Midsoles split between glossy black and “Electric Green” molds, and come stacked above an outsole that somewhat channels a vintage-y aesthetic due to its slightly yellowed treading.

Nike has not communicated an official drop date for these just yet, but early reports have these slated to drop during Summer 2021.