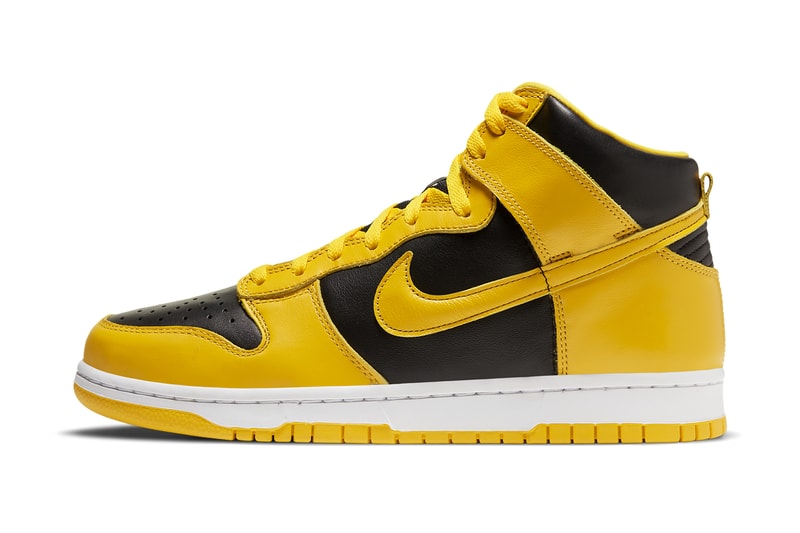 A holiday re-release of Nike Sportswear‘s Dunk High “Varsity Maize” has been speculated for the majority of the year, and now those reports are coming into clearer focus with official images of the classic style appearing. First debuting in 1985 as part of Nike‘s influential “Be True to Your School” pack — where it represented the University of Iowa Hawkeyes — this Dunk‘s striking mix of black and yellow was also used on 1999’s legendary Dunk High “Wu-Tang” and a 2012 Dunk High release, but this marks its most true to the original remake yet.

Rich, elegant black leather is placed on the toeboxes, quarter panels and collars, while black nylon is used on the traditional tongue. Sporty yellow leather then serves up the shoe’s namesake by gracing the mudugards, eyestays, midfoot Swooshes, collar flaps and heel. There’s a yellow Nike tag on the tongue and small yellow heel tabs that are purely for aesthetic purposes as well. Down below, a white midsole and yellow outsole round off the look.

Early release rumors placed the “Varsity Maize” release during the holiday season, a vast, vague prediction that’s now been narrowed down to December 9. Although this exact date has yet to be confirmed by Nike, whenever the Dunk High “Varsity Maize” does indeed arrive it’ll hit Nike SNKRS and retail for $120 USD.

For more from the Swoosh, peep the avant-garde Air Max 270 Vistascape in a rugged “Triple Black” colorway.