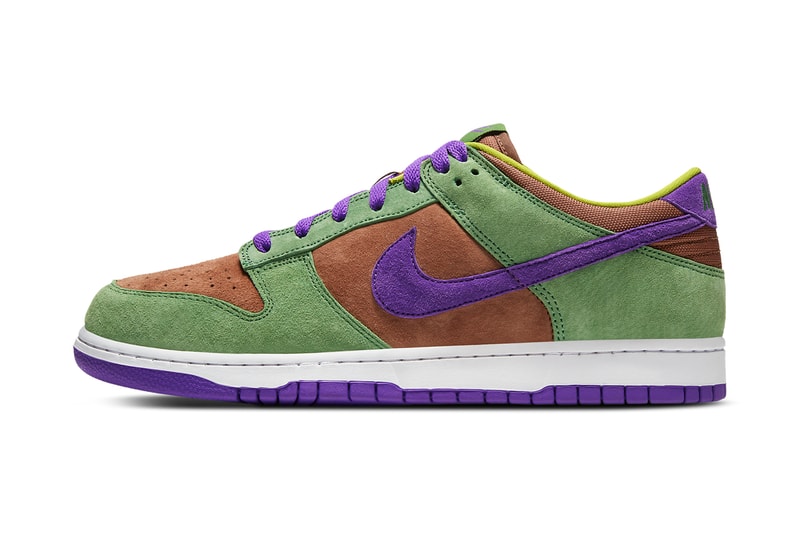 First released as a CO.JP exclusive in 2001, Nike Sportswear‘s “Ugly Duckling” pack of Dunk Lows has been brought back to market in 2020 — the “Plum” released in February, and now the “Veneer” is set for a fall drop. Although the “Veneer” certainly hasn’t grown into a beautiful swan in the 19 years since it first debuted, its haphazard assemblage of mismatching shades and supple construction provide a self-confident, standout look that’s sure to find favor in today’s Dunk-crazed climate.

Constructed entirely of suede save for the throat, collar and part of the heel, the “Veneer” uses a rich brown for its toeboxes, quarters, collars and heels, then adds a refreshing green on mudguards, eyestays and midfoot overlays. Purple is thrown into the mix as well, gracing the midfoot Swooshes and laces while also appearing under the green Nike spellout on the heel tab. Laces are done up in purple while tongue tags blend purple and green. The collar lining is dressed in a highlighter-like yellow shade, and a combo of white midsoles/purple outsoles rounds off the look.

The Nike Dunk Low “Veneer” will reportedly release on Nike SNKRS come November 10, though this has yet to be officially confirmed by Nike. The MSRP is set at $100 USD.

For more from the Swoosh, check out Bodega’s duo of moccasin-like Dunk Highs.