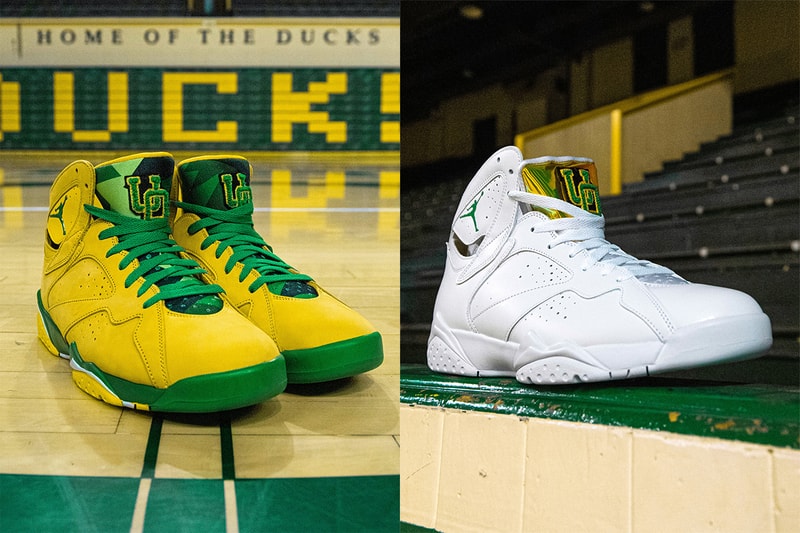 While several college programs have a sponsorship deal with the Jumpman, few can compare to the relationship that the University of Oregon — the alma mater of NBA players like Jordan Bell and Dillon Brooks — and Jordan Brand have just based off of history and exclusive products alone. And now, the institution’s lineage of special PEs is growing by one in the form of these newly emerged Air Jordan 7 “Oregon Ducks” PEs that will be laced up by the men’s and women’s basketball squads for the Pac-12 Tournament.

As expected, school pride is the focus for this exclusive colorway and is shown off through the translation of the Pit Crew’s team colors. Smooth leather materials are used to assemble its high-cut base layer, most of which permits a bold yellow hue to swarm the side panels and toe boxes. The kicks then take its Duck-inspired theme further by embellishing the Jordan Brand insignias nearest the ankles, laces and throat in a bold green, the latter of which also sprinkles in notes of black and a pastel green among its angular retro patterns. Furthermore, the tongues — which usually bear Jordan branding — are jazzed up with a chenille-infused “UO” logo.Midsole molds are also painted in Oregon-esque green, and come stacked above a thin white mold and yellow outsoles to complete its collegiate motif.

The women’s variant, while still zeroing in on the Eugene-based school’s theme, is less flamboyant in style. From the ground up, a crisp white skin coats the outsoles and leather uppers, leaving for the accents to do most of the heavy lifting. Jordan Brand symbols and and tongue logos are presented in the same fashion as the men’s pair, but this iteration deviates as the tongue rids of the throwback patterns and instead opts for a metallic gold background.