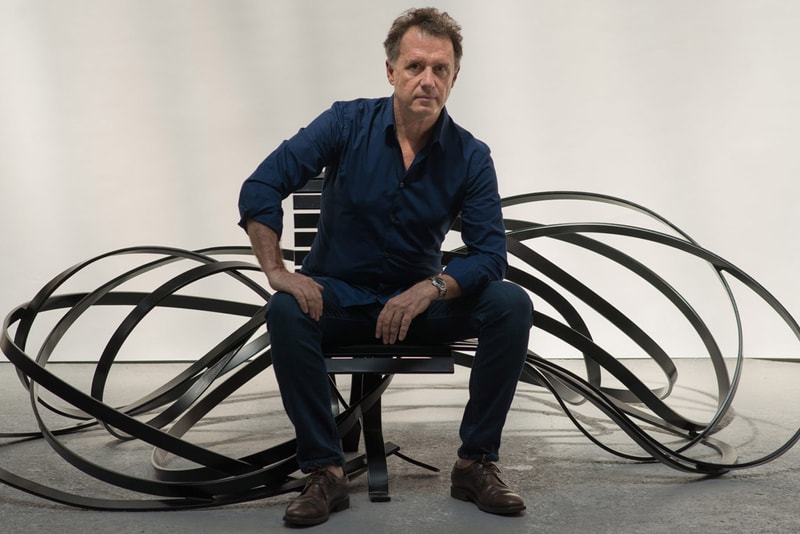 You might have seen one of Pablo Reinoso’s sculptural benches before. Situated alongside the River Thames in London, beside the Quai Gillet in Lyon and on the south terrace of the Elysée Palace in Paris, these swirling benches spill out and encroach on the surrounding area like living structures. Utilizing natural products, including wood, stone and marble, as well as industrial components like steel and brass, Reinoso explores both the destruction and required protection of the planet. London’s Waddington Custot gallery is celebrating the work of the contemporary French-Argentine sculptor with a series of digital solo exhibitions throughout the month of September. A presentation of some of the artist’s most iconic works will complement the online project in the gallery space. The wooden structures of Reinoso’s widely-known Spaghetti Benches, seen with Curly Bench and Deroule, mirror the organic forms and patterns of the material’s beginnings. “When I first started working on the Spaghetti Benches series I was inspired by the public bench as a universal cultural heritage, one which has a timeless quality to it, as opposed to the work I did on the Thonet series, where I was also working on a seating object, but one that is immediately recognizable,” Reinoso tells HYPEBEAST. “At the same time, I was reflecting on the idea of growth, and I begun associating the development of an artwork with the theme of growth in the vegetal world.”

“These artworks reflect this interconnectedness, evoking natural phenomenons such as ramification…,” he continues. “Beyond their primary function as seating objects, the Spaghetti Benches literally flourish, the wooden planks whirl out into shapes that evoke branches and the natural elements. The material itself returns to its previous state as a tree, as a living creature, reconquering its original freedom.” The tangled limbs of the benches invite the public to sit on them, while pushing the viewers to consider the relationships between man and the natural environment. For his latest work, Reinoso uses dead trees and other destroyed or decaying materials to suggest the strained relationship between nature and humanity, as well as a possible resolution. “On the one hand, I wanted to preserve trees as much as possible whilst continuing to work with wood,” he says. “On the other hand, this immediate environmental concern ties in with a recurring metaphor in my work, which is my desire to give a second life to the materials I work with, something I had touched upon with the Spaghetti Benches, or the Thonet series.”

Not only do his designs reference climate change and the relationship between man and the natural environment, but reflect on the ways in which public spaces can be experienced. Reinoso’s benches have taken on further significance, as people have begun to question and reimagine how public spaces can be used due to the coronavirus pandemic. “The impact of COVID-19 is present both in my work and my reflection, especially when it comes to public space, considering how strongly the pandemic has affected the way we experience and move through it,” Reinoso explains. “As an artist, I believe that art in public spaces will have to shift its focus to the long term, to projects that are durable but also adaptable enough to stand the test of our ever-changing times. I am currently working on a project titled Social Distance Seat, which stems from a reflection on how to adapt and navigate shared spaces in new ways in light of current restrictions.” “In addition to Social Distance Seat I am working on five to six different projects, continuing my research and theoretical reflection on existing and upcoming works,” he adds. “During the lockdown in France, I have revisited and reactivated early series such as my Breathing Sculptures and continued to experiment with more recent ones including the Tools series. At the same time, I also took some projects in very new directions. Because of the current situation, I travel less than I was used to and I find that this is a very propitious time for reflecting and experimenting.”