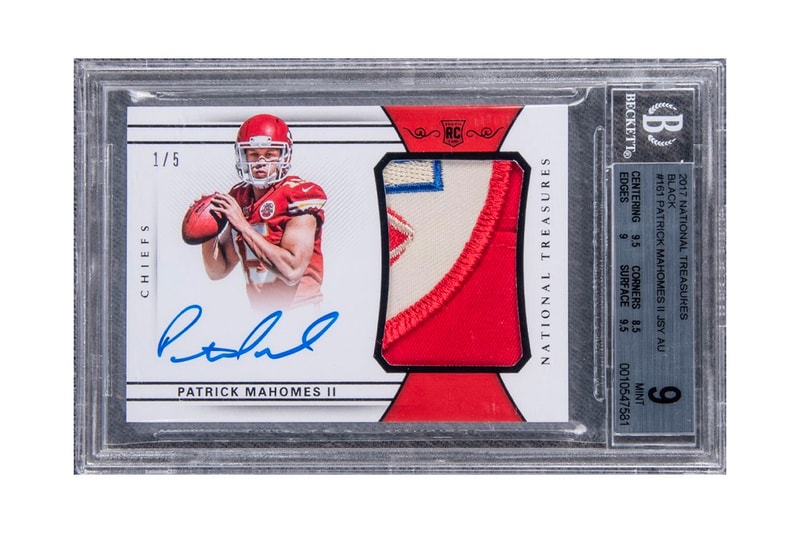 With the success that Patrick Mahomes has been experiencing, it comes as no surprise that he continues to shatter records all over. The trading card world welcomes this exceptionally rare 2017 National Treasures Kansas City Chiefs Patrick Mahomes autographed rookie card.

This Panini card is only one of five and is in pristine, mint condition. The opening price, set at $50,000 USD sent fans in a bidding frenzy, with Goldin Auctions seeing 39 bids on the lot. The card is described as one of the “rarest” Mahomes cards of all time.

The card is given a grading of BGS 9, “with none graded higher by BGS and none ever graded by PSA.” The strikingly bold blue signature is described to be perfect, receiving a 10 grading. What makes this card even rarer is the special-edition 4-color (though some say 5-color) “AFC Logo” patch, which is virtually unseen since the majority of the patches only have 3 colors. Not only is the card highly sought after, but the patch itself “adds an undefined quality and scarcity to this card,” making this a positively unique card.

Should the Chiefs successfully defend the Super Bowl from Tom Brady‘s Tampa Bay Buccaneers, the value of the card is expected to skyrocket in value immediately.

As it stands now, the card is the most expensive NFL football rookie card to hit the market, and subsequently the highest-priced Patrick Mahomes card in existence.

This 2017 @PaniniAmerica @PatrickMahomes rookie card 1/5 sold for a world record price of $861,000 at https://t.co/qlvBBNLR8M tonight , the highest priced Mahomes item ever sold . pic.twitter.com/MbX6KKtiLH