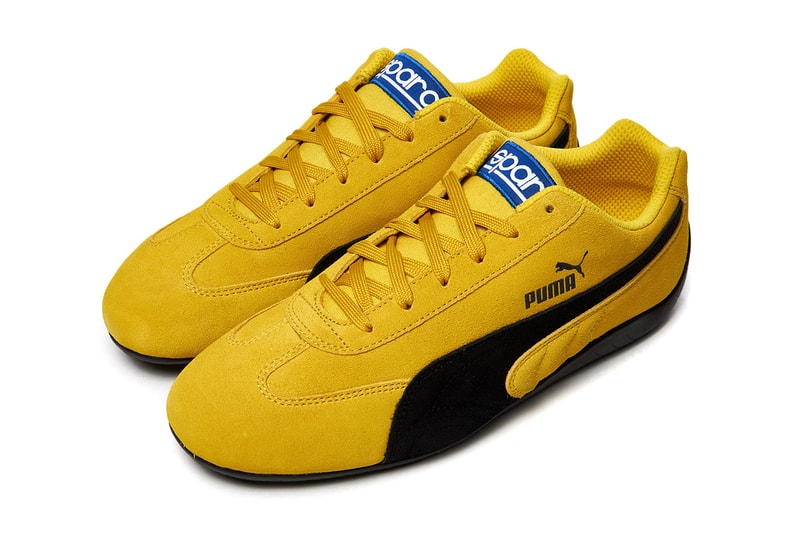 Sparco is an Italian auto part and accessory company known for its racing seats, steering wheels, suits and footwear, favored among many automotive aficionados and race drivers. In 1999, it was enlisted by PUMA to help create a shoe that’s as good for the race track as it is the streets, which subsequently lead to others redesigning the shoe — such as this Ferrari version that recently re-released.

Just over 20 years on and the Speedcat couldn’t have come back at a better time. The likes of Prada and Balenciaga are stepping into this early 2000s footwear realm as of late, and now the original tastemaker is back with an undeniable presence. Appearing in “Maize/Puma Black,” this pair is made entirely from suede on the upper and prominently sports Sparco branding on the tongue. Alongside this you’ll find a racing heel, padded ankles, a grippy outsole that has tread like a car tire, and an overall low profile.

The “Puma Black/Whisper White” pair is ultimately the same, only it takes on even more retro design cues thanks to the metallic gold branding above the Formstripe on the lateral.

Take a look at the PUMA Speedcat OG Sparco in both “Maize/Puma Black” and “Puma Black/Whisper White” colorways above, and purchase them now at stockists such as Sivasdescalzo. The sneakers retail for €100 EUR apiece (approx. $120 USD).

In other news, Stüssy might be bringing back its OG Nike Air Huarache LE collaboration.