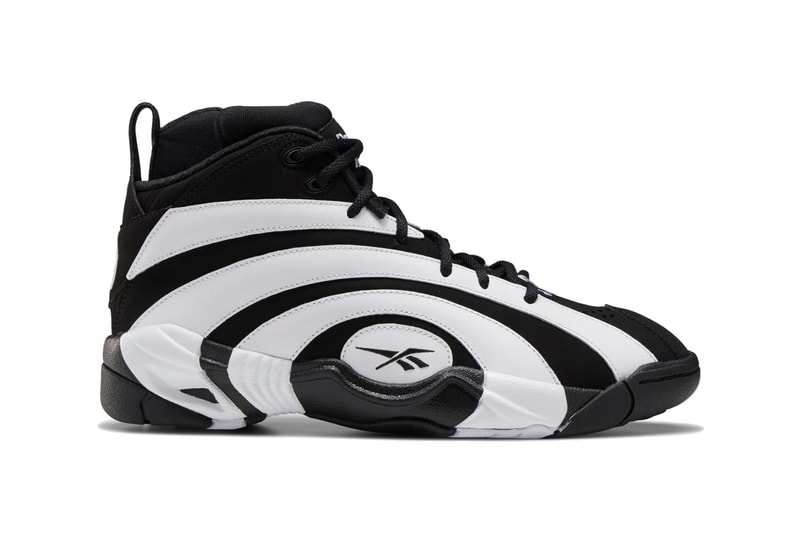 Shaquille O’Neal and Reebok‘s Shaqnosis is most well-known for its hypnotizing OG “Black/White” colorway, one that’s now been flipped to create a new-yet-familiar “White/Black” style. Serving up an optical illusion of sorts — one that may even trick hardened Reebok fans at first glance — the mesmerizing look is befitting of O’Neal’s fifth signature Reebok sneaker.

First arriving in 1995, the Shaqnosis strayed far off the path established by O’Neal’s four previous Shaq Attack silhouettes. Concentric circles spread out from the Vector logo on the midfoot, mixing a black nubuck and white leather overlays for a high-contrast look. Even this material blend is a homage — black leather and white nubuck were used on the OG pair, but in inverse positions: the former was present on the overlays, the latter on the base.

High-cut collars, beefy tongues and heel tabs add an element of strength to the top half, and Shaq’s memorable slam dunk logo is slapped on the heel. Down below, two-tone midsoles loaded with DMX cushioning — a tech that was omnipotent on ’90s Reebok hoop shoes, gracing everything from Shawn Kemp‘s Kamikaze 2 to Allen Iverson‘s Question Mid — provide look-completing comfort.

The Reebok Shaqnosis “Black/White” is set to release on the Reebok Japan webstore come October 2, and is priced at a tax-included ¥19,800 JPY (approximately $187 USD).