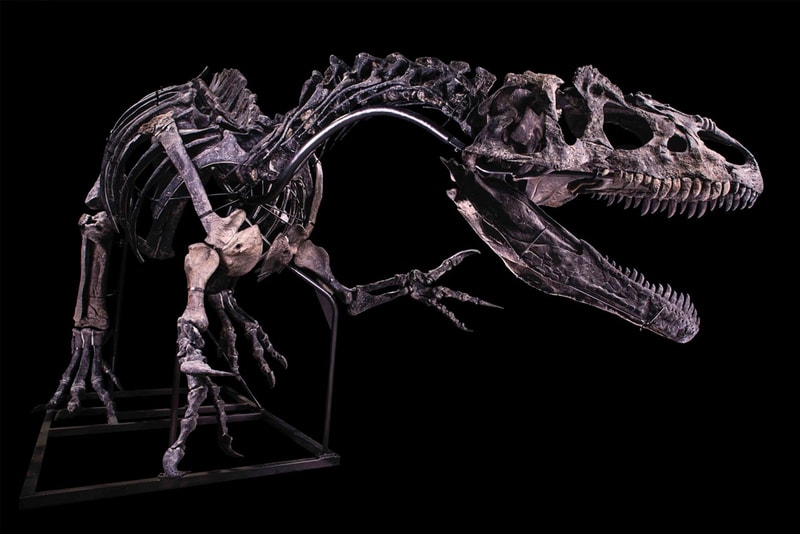 Maison Binoche et Giquello will be offering a large Allosaurus skeleton in an upcoming auction. The pre-historic figure is one of the largest discovered specimens of its species to date. The piece-de-resistance will be presented alongside a flurry of meteorites and fossils, like immaculately preserved lilies, butterflies, mammoth tusks and even dinosaur eggs. This follows a massive T-Rex skeleton sold at a Christie’s auction just recently.

Dubbed Naturalia, the upcoming sale of the Allosaurus is expected to fetch over $1M USD. Based on the previous Christie’s auction, there’s a chance the seven-digit estimate may exceed expectations — Christie’s T-Rex sale sold for $30M USD instead of its $6M USD estimate. The Allosaurus is over 150 million years old and was discovered just four years ago in Wyoming. Measuring at approximately 10 meters long, the dinosaur skeleton is one and a half meters above the species’ average length. Traces of injuries on several ribs and various scientific examinations, like X-rays, made it possible to “formulate the hypothesis of a titanic fight scene between the allosaur and its rival,” a nod to our understanding that the dinosaur was a ferocious carnivore. Items like a fossil plaque of sea lilies, a 50-million-year-old fish, a mammoth tusk and other exhibits will also be up for auction.

In case you missed it, the world’s biggest T-Rex was discovered in Canada last year.