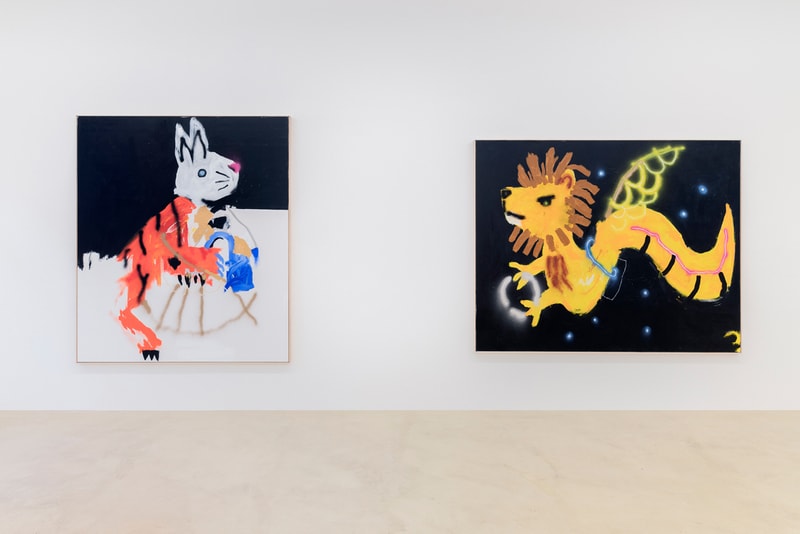 Rising Brooklyn-based artist Robert Nava is currently presenting a new crop of paintings at Sorry We’re Closed gallery in Brussels, Belgium. Nava is known for his acrylic on canvas artworks that portray messily painted figures influenced by ancient mythology and hybridized creatures. The artist finds inspiration for his subjects from various materials sent to him from friends, books on mythology and quick illustrations that he makes in his sketchbooks when listening to his favorite techno music. His highly metaphorical subjects, however, “don’t belong to a particular narrative,” said the artist in an exclusive interview with HYPEBEAST.

Nava continues to mix symbolic elements such as characters, animals, objects and gestures across his latest body of work in the Belgian gallery. These bold compositions continue to evoke a childlike innocence as the artist merges contrasting features in his subjects such as a tiger with a rabbit head, a lion with the body of a dragon and a clown-faced brute with a castle on its back. Nava’s paintings encourage onlookers to imagine a world far removed from reality that is filled with majestic beasts.

“Nava operates paradoxically as a sculptor. He erects Golems of lines, textures, and fights to bring out on these canvases companions of dialogues. What do they talk about together at night or in the early morning after having crossed the nothingness of this ritual of passage leading from darkness to light ? Perhaps they are telling themselves a world seen since 2020. A singular year, in six paintings, six scenes, six characters,” said Emilie Pischedda of Sorry We’re Closed gallery.

Check out installation views from Robert Nava’s latest exhibition at Sorry We’re Closed gallery. The show is running until December 19.