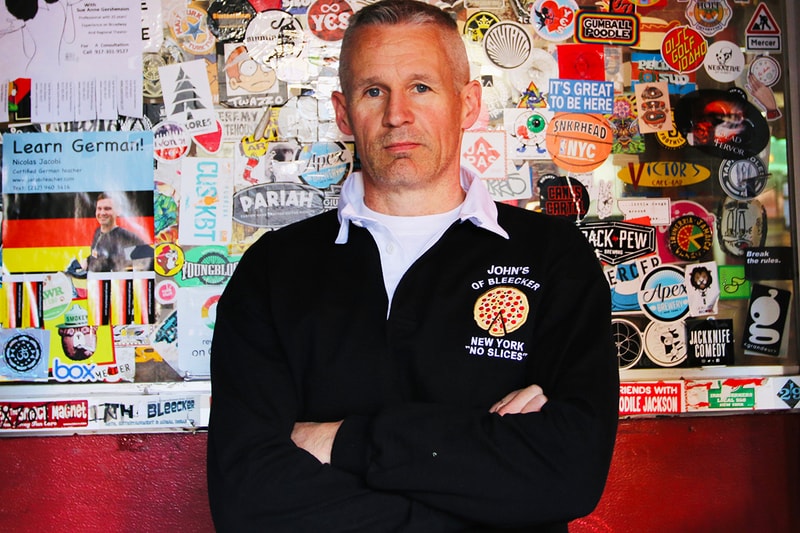 After partnering with Umbro last month, Rowing Blazers has now presented a new collaboration based a little closer to home. For the new capsule, the brand has linked up with John’s of Bleecker Street, an iconic New York pizzeria and home of the city’s oldest working pizza oven.

The collection features a number of nods to the pizzeria’s legacy, including two versions of the John’s of Bleecker Street logo. The logos used include “Mario” bricks emblem, and the now-famous “NO SLICES” graphic, referencing the pizzeria’s strict no-slices policy. This imagery appears across a rugby shirt, hoodie, crewneck, T-shirt and cap.

Launching the collection, Rowing Blazers founder Jack Carlson explained the collaboration, saying, “John’s of Bleecker is my favorite pizza place in New York City. John’s is famous for having the oldest pizza oven in New York City, and for its strict ‘NO SLICES’ policy. John’s is, among other accolades, also the most consistent pie in New York. Perhaps that’s the result of the incredible team, which includes many who have been at John’s for decades. You can spot them, because they’re wearing John’s gear with vintage versions of the pizzeria’s logo. Two of my favorites are what we call the ‘Mario Brothers’ bricks logo, and the ‘No Slices’ logo.”

“We’ve collaborated with the amazing folks at John’s to recreate some of this vintage apparel with the original logos. They’re old-school and look almost bootleg. But they’re not. This limited-edition capsule is the real deal — just like John’s of Bleecker Street.”

Take a look through the collection in the gallery above. All pieces are available now from the Rowing Blazers web store.

In other fashion news, Jack Wolfskin has opened its archives.