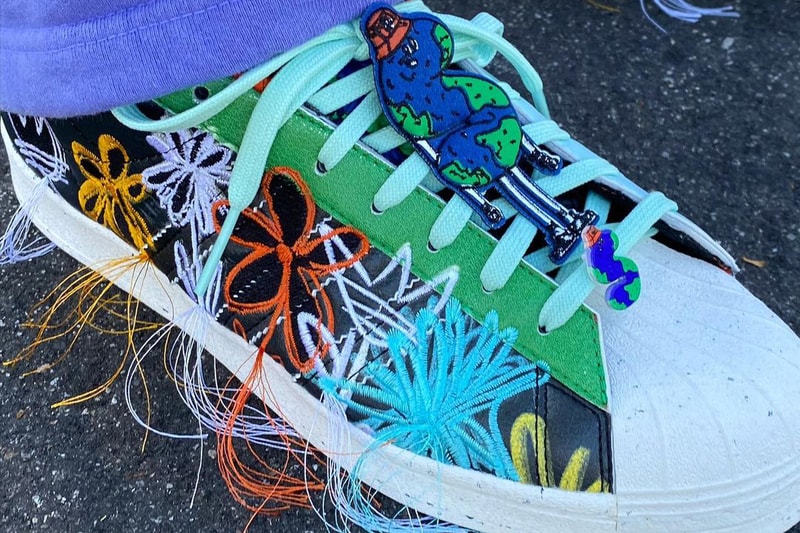 Sean Wotherspoon and adidas are expanding their partnership with a black-based take on the Superstar SUPEREARTH. Premiered by Wotherspoon on his Instagram, the duo’s second Superstar retains the dangling floral embroidery and bright colors of its predecessor, but also adds new embellishments and an alternate color scheme for a fresh look.

The shoe’s base consists of a black leather quarter, kelly green eyestays and natural rubber toeboxes and midsoles. Signature SUPEREARTH flowers are embroidered on the lateral and medial sides alike, done up in bright blues and yellows plus rich oranges and soft purples. Each features long, uncut strings that dangle down to the ground. There’s also a single stenciled flower on the lateral forefoot and a rough-hewn heel tab.

Tongues are presented in black and forgo a standard Superstar construction for a thinner build reminiscent of other adidas Originals classics like the Samba. They also feature a printed Earth graphic, and are overlaid by light blue laces — themselves embellished with a three-dimensional Earth-inspired character in a bucket hat. Unique lace deubres provide flair by the forefoot while co-branded orange tongue tags, red collar linings and a cork insole with the Spoonman’s SW signature complete the look.

In the caption of his Instagram post revealing the shoe Wotherspoon noted that it were originally supposed to release exclusively in China, but would instead see a global drop. However, a specific date of arrival has yet to be announced.