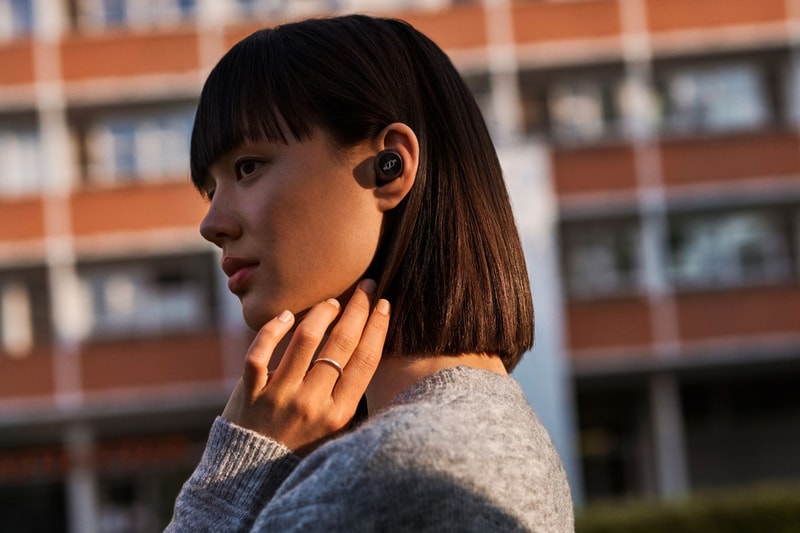 These are truly the best earbuds we’ve ever experienced in terms of sound and design. The Anniversary Edition features the same specs as the original MOMENTUM True Wireless 2 released earlier this year, but with a new black color that highlights Sennheiser’s logo at the center. The buds use Bluetooth 5.1 and transmit “CD quality” sound through an array of supported codecs. Sennheiser also boasts that its 7mm dynamic drivers “create superior stereo sound with deep bass, natural mids, and clear, detailed treble.” It’s true. These buds deliver a deep bass the likes we’ve never experienced without the use of over-the-ear headphones. Tracks like Devonwho’s “Lyon” pop thanks to the enhanced treble lifting all the electronic synths. But kicks still hit like a truck with bass loud enough to recreate the reverberation made from a car stereo system.

Most of these sounds are supported by the True Wireless’s Active Noise-Canceling technology, which completely isolates outside sounds with its thick, yet comfortable eartips (that come in several sizes) and twist-in design, which also securely fits into the canals similarly to the Galaxy Buds. They’re so good that we’ve left the faucet running several times while wearing them, unable to hear the water running. It’s even more impressive the buds are able to isolate sound so well without any electronic muting assistance.

If the sound couldn’t be more pristine, the Smart Control allows for further sound personalization thanks to its built-in equalizer. Unlike other in-app equalizers, Sennheiser’s Smart Control customizations can actually make a noticeable difference. Although the equalizer only allows users to tweak bass, mid, and treble, those are the only options really needed to transfigure a given track to suit its strengths. Additionally, the earbuds’ Transparent Hearing feature allows it to blend in ambient sound with just a touch for users to hear the outside world again. The buds have a built-in microphone next to the earplugs to draw in ambient sound when needed, and it works as intended. They’re also used during calls to pick up your voice.

Sennheiser’s product can utilize the voice assistant like Siri out the box and easily pair to any device, unlike the Beats Wireless 3, which in our experience would drop its signal in one earbud constantly. We’ve yet to have to put the buds back in their case to reconnect. Sennheiser says the True Wireless 2 are IPX4 certified, meaning it can handle some splashes of water or workout sweat without shorting out.

The default gestures used to operate the earbuds hands-on are easy enough to remember when compared to other premium buds or over-the-head headphones like the WH-10000XM4. What’s more, is that these gestures can be customized and set for different functions from the Sound Control app. The only issue we have with this is the sensitivity on the bud’s touchpads varies at any given moment. A soft touch to perform a function may register at one moment but not another, insisting a firmer tap is needed when one wasn’t before, and vice versa. Sennheiser’s MOMENTUM True Wireless 2 Anniversary is not only the best functioning earbuds we’ve ever used, but it’s also one of the most stylish. The charging case is sleek and uses a soft to the touch woven fabric as its material. It’s also relatively small when compared to other wireless charging cases, more similar in size to a contact lens case than the jewelry box design often seen. On the center of the case is the same Sennheiser battery design prominent on the touchpad of the earbuds. On the topic, the buds have a seven-hour battery life, which of course can be extended to up to 28 hours by using the charging case.

The MOMENTUM True Wireless 2 Anniversary editions run for $299.95 USD, which is the standard price for any given premium earbuds. They’re a great alternative to Sony’s current WF-1000XM3 earbuds, offering all the benefits of the product, but with a sleeker, more contemporary design. If you’re in the market for premium earbuds, Sennheiser knocks it out of the park.