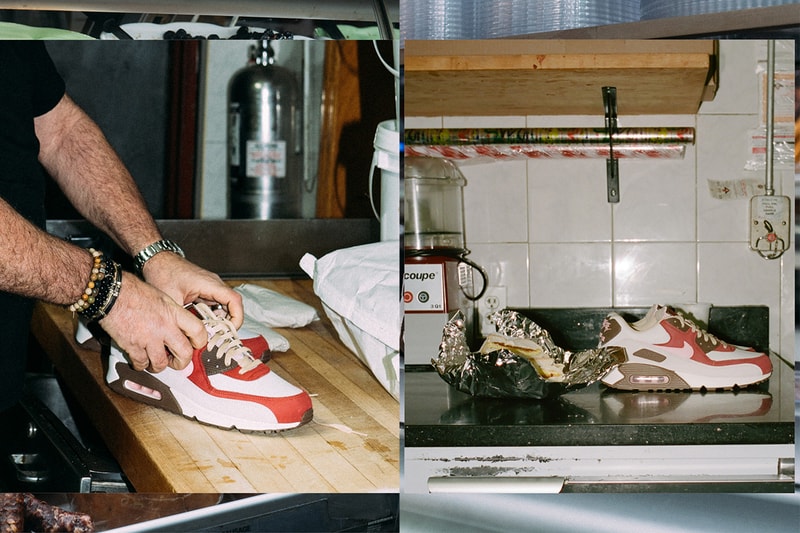 Air Max Day 2021 is just around the corner, and in its usual form, Nike is pulling out the big guns to celebrate its yearly anniversary. This year sees the return of the Nike Air Max 90 “Bacon,” bringing back Dave Ortiz of Dave’s Quality Meats’ iconic 2004 pair that now sees its first retro in 17 years. In honor of the shoe, Sevenstore has created a very apt editorial that spotlights the “Bacon” in all its glory, all while looking deeper into its roots.

Starting outside Anthony & Son Panini Shoppe — the Brooklyn-based institution that has served sandwiches and NYC deli favorites since 1994 from its 433 Graham Ave. base — Sevenstore takes us on a visual journey centered around the best bacon, egg and cheese sandwich there is. While notes on how to prepare the recipe appear and the process of the sandwich being made flickers throughout the editorial, there’s always a Nike Air Max 90 “Bacon” taking center stage in the photoshoot.

While you’ve probably heard it’s bad luck to put new shoes on the table, no one ever said you can’t put them on the worktops of a service station. Here we get a closer look at the “Bacon,” showcasing its “Sail” and “Straw”-based upper that’s decorated with deep red hues and touches of pink on areas such as the leather Swoosh.

Elsewhere around the shoe, we find brown on the eyestays, midfoot window, tongue tag and heel badge, while a two-tone brown and ash-tan midsole rounds out the pair, with the former element housing a pink-tinted Air Max window.

For more big sneaker drops this week, here are the ones you mustn’t miss.