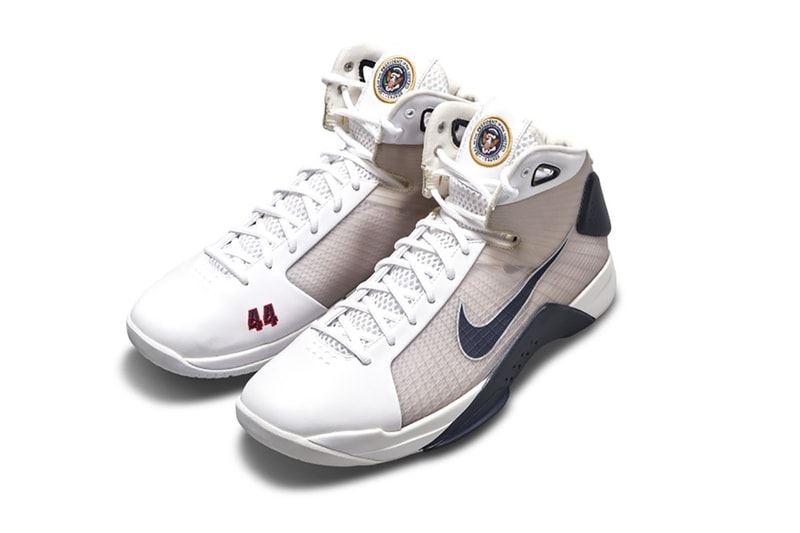 Barack Obama is primarily known for serving two terms as the 44th President of the United States, but outside of his work in office, the Hawaii-born icon also displayed a deep affinity for the sport of basketball. As a gift, Nike fashioned him his very own Hyperdunk PEs, and this deadstock 1-of-2 pair has now been listed via Sotheby’s for a staggering $25,000 USD.

To honor the nation, the Swoosh team crafted this hardwood-ready collectible in the country’s colors of red, white and blue and features a look much similar to the 2008 USA team’s “United We Rise” colorway. Up top, you can find clean white paint applied to the leather panels that line the collars, throat and toe boxes, as well as the mesh fabrics that form the tongue and side walls which rest underneath a translucent film held together by Flywire. From there, darker fractions of navy touch to Swooshes, angular midsole molds, and heel counters which feature tonal/debossed Nike lettering.

However, what really makes these kicks special is the personalized patriotic-inspired elements. Tongues substitute out the traditional Nike branding for the Presidential Seal, while the medial side’s forefoot embroiders in the “44”. Moreover, the insoles print out bald eagle graphics alongside “1776” notations to pay homage the year of America’s founding.

A detailed look is shown up above, and note that these will be available through Sotheby’s for 25 bands starting on February 12 at 4:44pm to coincide with the start of President’s Day Weekend.

In case you missed it, the Nike Air Huarache “Scream Green” is returning soon.