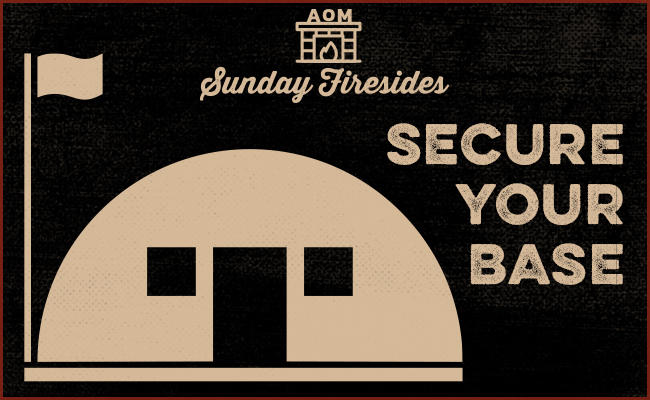 In the novel Moonraker, Ian Fleming writes that in rigorously preparing for another dangerous and uncertain mission, James Bond “had achieved Clausewitz’s first principle. He had made his base secure.”

Fleming’s paraphrase of the famous war strategist’s philosophy is worth adopting not only by military generals, or secret agents, but ordinary citizens as well.

Securing your base means establishing a self-sustaining, shock-resistant “headquarters” that is well-defended against disruptions from external forces.

The foundation of a secure base begins with good health; life is invariably more precarious when one is not physically strong and resilient.

Because debt enslaves, so that what is “yours” is not your own, financial independence further stabilizes your footing.

Skills of all kinds, whether mechanical, domestic, or combative, allow you to rely less on others and more on yourself. Though security doesn’t equal complete self-reliance; tight relationships with family and friends solidify your base too.

Business owners should avoid “entangling alliances”; partnerships, no matter how apparently promising, rarely work out. This includes “partnering” with the overlords of social media, who, with a tiny tweak of their algorithms, can destabilize an entrepreneur’s entire enterprise.

Finally, a secure base requires secure beliefs. While philosophic and political positions can and should evolve over time, they should not be so unexamined, so lacking in well-studied context, that every current of change knocks you into an incapacitating stupor of confusion and cognitive dissonance. You should know why you believe what you believe.

The purpose of creating this kind of personal garrison isn’t to passively retreat from the theater of life; rather, it is to create a fortification from which to better launch your offensive operations.

As one of 007’s worthy antagonists explains: “Mister Bond, power is sovereignty. Clausewitz’s first principle was to have a secure base. From there one proceeds to freedom of action.”

The post Sunday Firesides: Secure Your Base appeared first on The Art of Manliness.