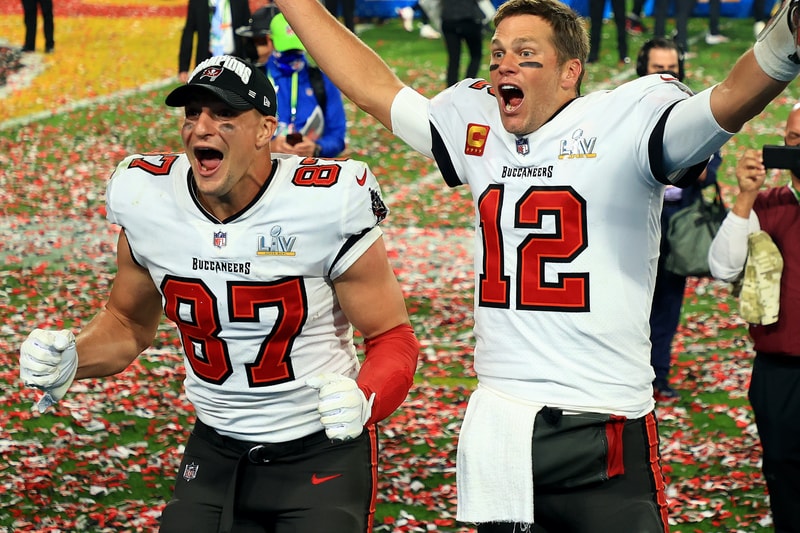 The GOAT has done it again. Tom Brady officially led the Tampa Bay Buccaneers to their first Super Bowl championship since 2003 — and in their home field nonetheless. The 43-year-old has also earned his fifth Super Bowl MVP, making NFL history as the only player to ever receive the award five times.

Tampa Bay’s win over the Kansas City Chiefs has further cemented Tom Brady as the world’s greatest NFL player of all time. The Super Bowl LV win brings his championship tally up to seven rings — the most wins of any player in the leagues’ history. Since leaving the New England Patriots 11 months ago, tonight’s win also marks the first championship ring he has won without the franchise and former coach, Bill Belichick.

The three players, Rob Gronkowski, Antonio Brown, and Leonard Fournette, who have scored touchdowns for the Buccanneers were all personally recruited to the team by Brady himself. The first two touchdowns came from Gronkowski, who has now won all four of his NFL championships with Brady. Brady connected with Gronkowski early on in the game, scoring a touchdown in each of the first two quarters and showing off the undeniable chemistry between the players.

In the first quarter, Brady found Gronk for their 13th postseason touchdown. The 8-yard pass topped Jerry Rice and Joe Montana for the most postseason TDs by a QB and receiver pair in NFL history. With the two touchdowns tonight, Gronk now has the most career receiving touchdowns in Super Bowl history, with almost all of them thrown by Brady.

At the end of the second quarter, Antonio Brown received a pass from Brady for 1 yard, which came on an angled route that worked against Chiefs’ defensive back, Tyrann Mathieu. Brown was able to successfully complete the pass, bringing the Bucs up to 21-9 over the Chiefs by halftime.

Leonard Fournette scored the final touchdown for the Bucs in the third quarter for a 27-yard rush. Kicker Ryan Succop made the extra point and a two-point 52-yard field goal to bring the Bucs up 31-9.

The Chiefs’ final attempt at a touchdown was intercepted by Devin White, who deflected the pass in the end zone. The Chiefs did not score a single touchdown during the Super Bowl LV. Kicker Harrison Butker scored all 9-points for the Chiefs this game.

Checkout the highlights from the game and reactions to the GOAT below.

And Gronk, be careful with that trophy…