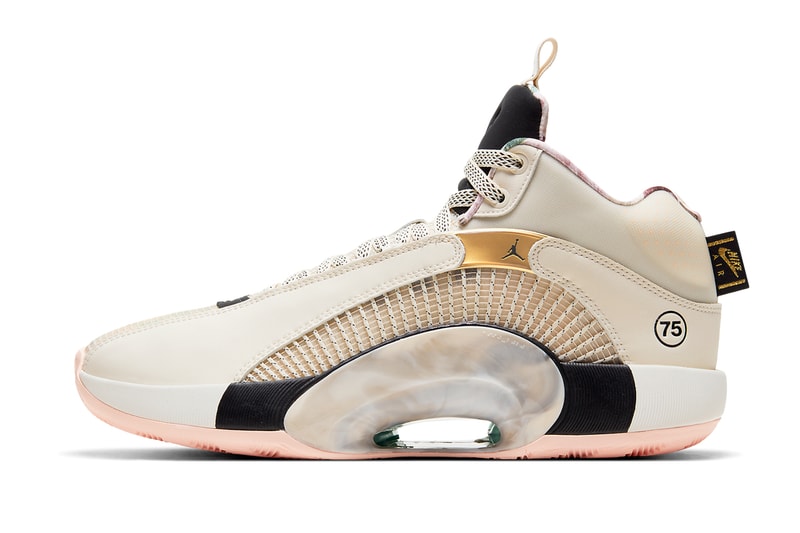 When Jordan Brand pays homage to Paris, it’s usually through the lens of a PSG collaboration or an effort with a Parisian brand like Maison Chateau Rouge, but for its latest homage to the French capital the Jumpman has readied an exquisitely-detailed Air Jordan 35. What’s just as striking — if not more so — than the look, however, is the limited production run: the AJ35 “Paris” has been kept to a scant 102 pairs.

A “Pale Ivory” tone is used across the majority of the uppers, ranging from the Air Jordan 12-esque mudguards to the Flightwire-overlaid quarters, throats and toeboxes. Though these quarters are left unadorned, the throats and toeboxes equip faint, aristocratic floral patterns under their geometric overlays. This floral pattern also arrives in much more pronounced form on the collars and insoles.

Moving back to the heel, each shoe is stamped with a black “75” graphic on the lateral side for a nod to Paris’ area code. Tags are split between golden Nike Air graphics and rich jade “PANAME” hits. More gold details are present on the “bridge” piece that connects the mudguard with the heel overlay, at the bottom of the throat and on the black Air Jordan 5-style tongue, both on the outer half’s Jumpman and the inner half’s individually numbered badge.

Down below, a marbled Eclipse Plate provides explosive, responsive cushioning by working with Zoom Air units in the forefoot and heel alike for maximum vertical propulsion. Two-tone ivory/black midsoles and pale pink outsoles with a black Jumpman graphic round off the look.

An official release date for the 102 pair(is) of this ultra-limited Air Jordan 35 has yet to be announced, but they may hit European Nike SNKRS sites later this spring.

If you prefer more classically-styled Air Jordans, the Air Jordan 7 “Flint” is set to retro for the first time since its 2006 debut.