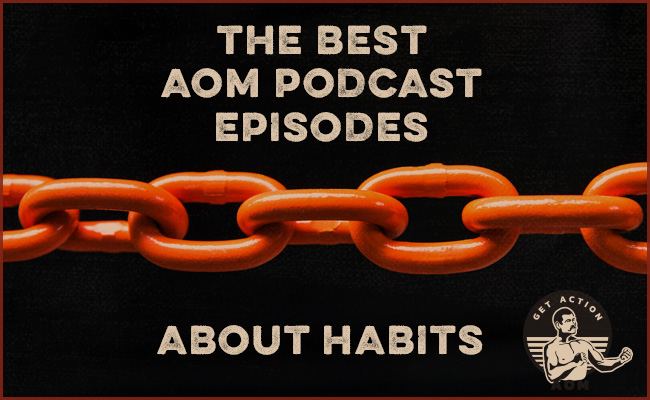 At the beginning of every new year, people around the world make resolutions for how to better themselves. Many of these goals revolve around habits — forming new ones, eliminating bad ones, cementing irregular ones. On the Art of Manliness podcast, we’ve covered a lot of different facets of habit forming and breaking, including specifically tackling the two most common resolutions: exercising more and losing weight. Check out the seven episodes below to get the new year started on the right foot and a handle on your habits.

Why You Don’t Change (But How You Still Can)

Change is hard. But most self-help books out there treat people like machines, blitzing past this truth and offering mechanical 5-step formulas for changing your life. In this interview, Dr. Ross Ellenhorn says that such simplified solutions hugely miss the mark and that if you ever want to change, it’s more fruitful to go a lot deeper into why you don’t.

The 7 Habits of Highly Effective People

It’s been 30 years since the classic The 7 Habits of Highly Effective People was published, but it’s just as relevant as ever. In this interview, I spoke with the late Stephen Covey’s son (also named Stephen) about why his father’s work has had such staying power. We walked through the seven habits, exploring how each is lived individually, as well as how they work together to create a flourishing life. If you’ve never read The 7 Habits, this episode is a great introduction.

The Tiny Habits That Change Everything

Have you had trouble following through on goals and New Year’s resolutions in the past? Maybe the goal you set for yourself was just too big to successfully tackle. You need to think smaller. Tiny, even. That’s the argument BJ Fogg makes in this interview. You’ll learn how to build habits that feel easier and require lower levels of motivation, as well as how to successfully incorporate small rewards into your habit building.

A Proven System for Building and Breaking Habits

If you’ve failed at habit building or breaking in the past, you might think you just need more willpower. That’s not what James Clear argues in this interview. Rather, it’s simply about crafting optimal systems for behavior change. Clear walks the listener through his own research-backed 4-step process for effective habit formation.

Millions of people each year resolve to exercise more. Most fail. Why is it so hard to make exercise a habit? And what can you do to make it stick? In this interview, Michelle Segar makes the case that you need to completely change the way you think about exercise. Counterintuitively, the most common reasons for exercising, like losing weight or getting healthier, aren’t effective motivations. Learn all about the better motivations by listening to this episode.

Why You Overeat and What to Do About It

We all know the basics of losing weight: don’t consume more calories than your body needs. And yet many of us still overeat anyway. Why does our behavior betray our intentions? In this interview, Stephan Guyenet argues that the answer lies in the ancient instincts of our brains that no longer fit the environment of the modern world. You’ll also find out how to beat those instincts.

The Power of Habit

Charles Duhigg’s The Power of Habit was an instant hit when it came out about a decade ago — the book revolutionized the popular understanding of how habits are formed. In this episode with Duhigg, you’ll learn about the three parts of “the habit loop” and how to hack that loop to change your behavior, whether it’s adopting new habits or breaking detrimental ones.

The post The Best AoM Podcast Episodes on Making and Breaking Habits appeared first on The Art of Manliness.