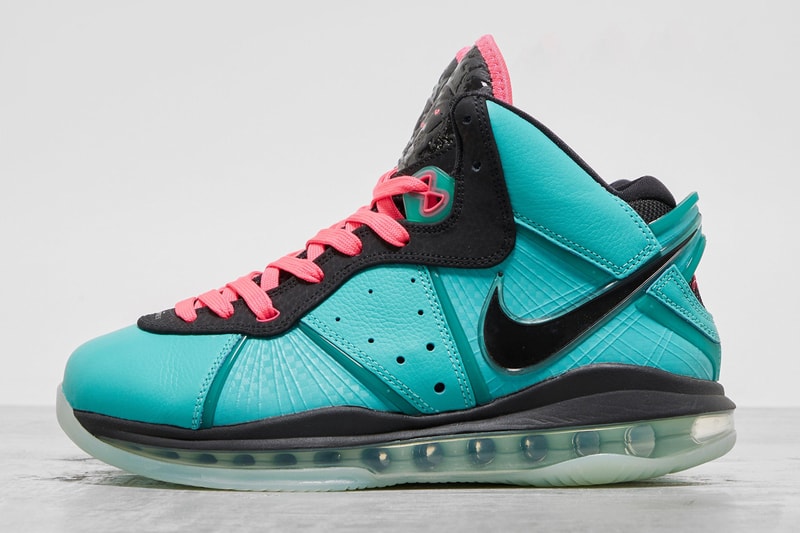 One of the most iconic models in LeBron James‘ entire Nike lineage, the LeBron 8 “South Beach” is set for its first ever retro release. Originally debuted in October 2010, right before the 2010-11 NBA season kicked off, the “South Beach” is a time capsule of a different era in the NBA: LeBron was the league’s biggest villain after leaving his hometown Cleveland Cavaliers to team up with Dwyane Wade and Chris Bosh on the Miami Heat, so the “South Beach” welcomed him to Miami in style with a fluorescent Miami Vice-esque palette that became one of Nike Basketball‘s hottest color schemes of the early ’10s.

Now, almost 11 years later, the “South Beach” is back in all its sun-drenched glory. Uppers are centered around a cool “Filament Green” tone, split between leather and synthetic panels while also boasting then-revolutionary Flywire for support. Dotted details appear on the medial side, and a tonal debossed Swoosh appears on the medial side of the toebox.

Black Swooshes wrap around the black heel, and more black appears on the throat and tongue — the latter of which boasts a large lion graphic. This lion’s eyes are given a pop of color with a flamingo-style pink tone dubbed “Pink Flash,” working with the laces, a special eyestay and the tongue trim to provide the shoe’s second signature tone. Down below, cool teal Air Max units combine with icy teal outsoles and a final dash of pink detailing to round off the look.

The Nike LeBron 8 “South Beach” is set to release sometime in May, and will be priced at $200 USD. It’ll be the latest in an ever-expanding line of classic LeBron 8s to hit the market, after the LeBron 8 “HWC” recently dropped and the LeBron 8 V2 Low “Miami Nights” was announced for a return.

For more from the world of the Swoosh, check out HYPEBEAST‘s official ranking of Travis Scott’s best Nike and Jordan collaborations.