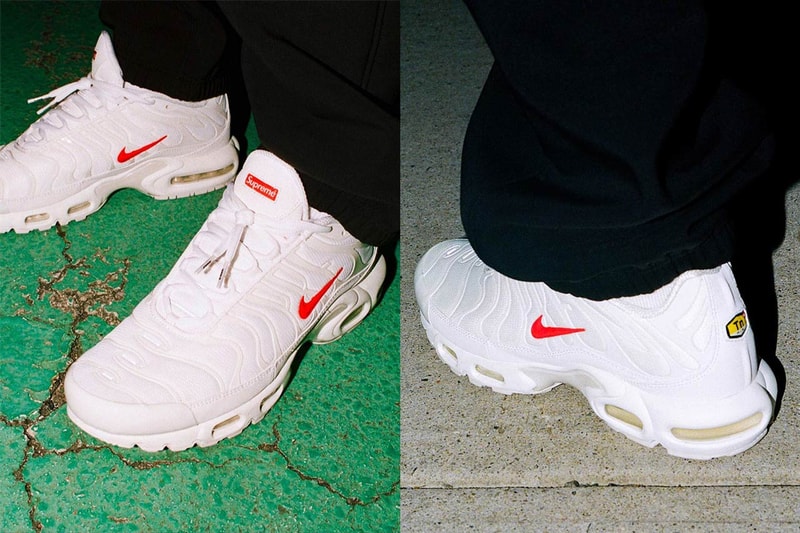 After releasing two colorful iterations of the Air Max Plus in October, Supreme and Nike are set to drop their third and final collaborative take on the classic runner: a signature mix of white and red. Though this tertiary style is much more toned-down than its vibrant predecessors, it still offers plenty of Supreme’s irreverent flair and keen eye for detail — making for a model that’s simultaneously subtle and visceral. Uppers are dressed almost entirely in white, with a smooth synthetic base coated in the Plus’ signature plastic overlays. Though these embellishments were originally meant to represent swaying palm trees, here they’ve been repurposed to read “Supreme” in a flowing font. Pops of red appear on the small midfoot Swoosh and jeweled Supreme box logo tongue badge, with a classic yellow TN hit gracing the heel. White midsoles, clear Air Max cushioning units and white outsoles round off the look. The shoes are also accompanied by a special Nike Running cap with a similar wavy Supreme graphic on its side panels, a TN badge on the front and a black Supreme-branded strap on the rear.

The Supreme x Nike Air Max Plus in white and red and its matching cap are set to release on the Supreme webstore tomorrow, November 5 at 11 AM ET, then hit Japan a day later on November 6. The shoes themselves are priced at $180 USD and the hat arrives at $45 USD.

For more news on upcoming sneaker releases, be sure to check out the latest installment of HYPEBEAST’s weekly Best Footwear Drops series.