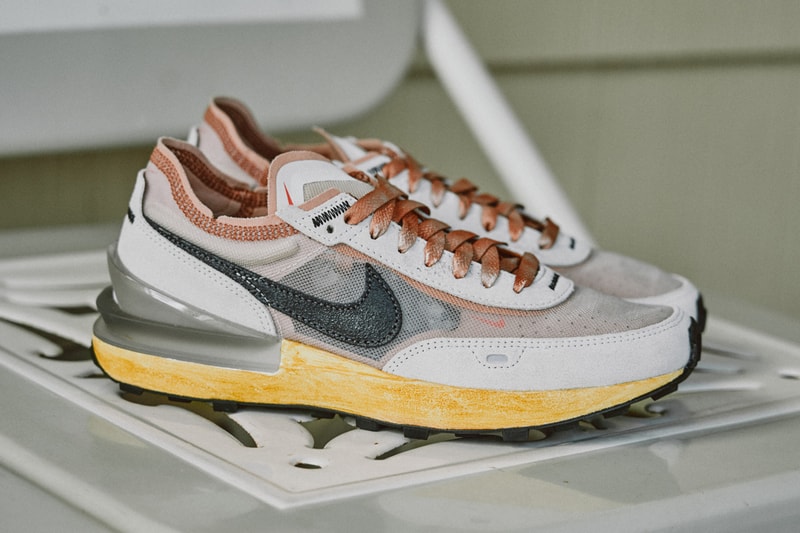 After Social Status revealed the Whitaker Group‘s exclusive Nike Waffle One by way of an Instagram post, the James Whitner-helmed retail outfit has now announced an official release date for its latest project and shared the inspiration behind its design. Looking all the way back to Nike co-founder Bill Bowerman‘s days of attempting to make rubber running shoe soles in his wife’s waffle iron, this Waffle One simultaneously salutes the humble genesis of Nike, Inc. and Bowerman’s neverending curiosity.

Conceptualized by Frank Cooke — a notable footwear designer who’s had stints at Wish ATL, Jordan Brand and others — the Whitaker Waffle One supplies a mixture of modern materials and aged detailing. Uppers are made from ultra-fine mesh, underlaid with synthetic support structures and overlaid by classic suede mudguards, eyestays and heel pieces. A rusty hue is present across most of the upper, most notably on the laces, and black midfoot Swooshes are made of cracked leather.

On the rear, two-piece heel clips add structure and support while down below EVA foam midsoles offer more aged detailing with a yellowed tint. Final hits of branding are served by small Swooshes on the heel and tongue alike, with a true-to-the-original waffle-patterned black rubber outsole completing the look. Outside of the shoe itself, the box gets in on the inspiration with custom comic-printed tissue paper that shows a stylized version of Bowerman’s waffle creation process.