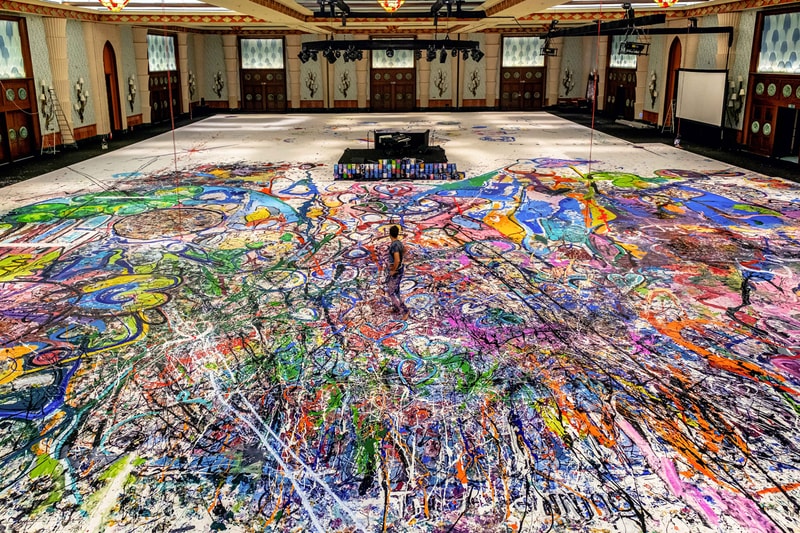 British artist Sacha Jafri is currently getting his hands covered in colorful paint to complete the world’s largest canvas painting in Dubai. Titled The Journey of Humanity, the artwork spans 1,800 square meters and is bigger than two football fields combined.

Jafri is using a massive room inside the luxury hotel Atlantis in Dubai to finish the work which will be unveiled in November. The work will then be divided into 60 smaller canvasses and will go on sale at a gala dinner event in December. The artist, who hopes to raise $30 million USD in the sale of this monumental piece, is described by Humanity Inspired as “widely regarded as one of the world’s most celebrated living artists [who] has raised more than $60 million USD for charities across the world from the sale of his art.”

Created over a period of 20 weeks, the sprawling piece will be sold to promote “global digital equality” with the proceeds to benefit the charity initiative Humanity Inspired led by Unicef, Unesco and the UAE-based philanthropic organization Dubai Cares. The project aims to bridge the gap in digital access between developing and industrialized countries. The project has been supported by over 100 celebrities including David Beckham, Deepak Chopra and Eva Longoria.

The work will also be submitted to the Guinness Book of World Records for Jafri to claim the title of the world’s largest canvas painting ever made. Get a closer look at the massive The Journey of Humanity painting above and then visit Humanity Inspired’s website for more details on the auction.