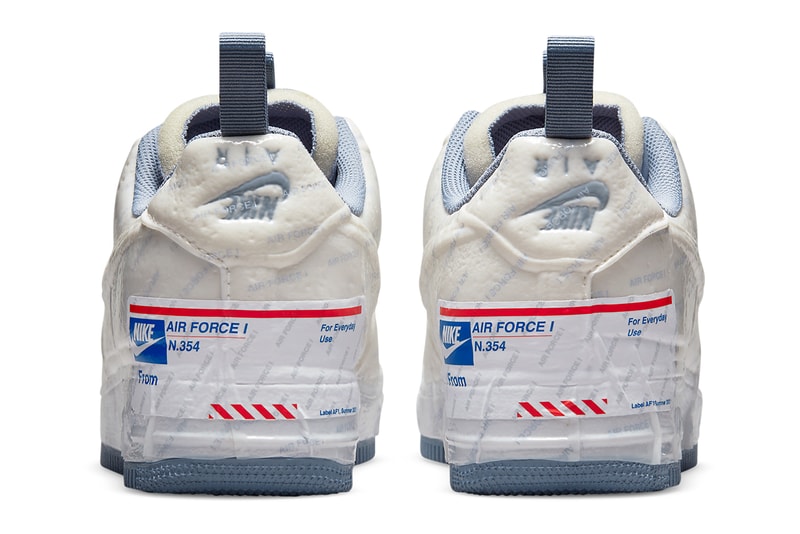 Nike N.354‘s Air Force 1 Experimental lives up to its moniker with conceptual colorways inspired by everything from the Phoenix Suns to stealth, but now it’s appeared in its most unprecedented makeup yet: one that seemingly draws from the USPS‘ familiar Priority Mail shipping boxes. Though seeing a shoe inspired by a humble white, red and blue cardboard box is surprising enough, there’s another element at play that makes the inspiration even more unique — almost all of Nike’s US shipping is handled by UPS.

The shoe’s cream upper and white midsole are ensconced in a foam shell, which serves an inside-out look and is covered in small repeating blue text hits that read “Air Force 1.” A signature detail arrives on the heel via a shipping label-inspired white, blue and red badge that alters the Postal Service’s standard label branding to read “Air Force 1,” “N.354,” “For Everyday Use” and more, all while retaining a cheeky “From” hit.

Further details are supplied by a red N. 354 text hit atop the lateral Swoosh, a sport blue toggle system atop the white laces and a dark berry blue on the exposed foam tongue, flipped heel graphics, collar, pull tabs and outsole. Small dashes of red on the tongue and insole round off the look.

At the time of writing, a release date for this USPS-inspired Nike Air Force 1 Experimental has yet to be announced. However, it’ll likely hit the Nike webstore this spring for $120 USD.

Elsewhere in the world of the Swoosh, Jordan Brand is set to bring back the Air Jordan 6 “Midnight Navy” later this year.