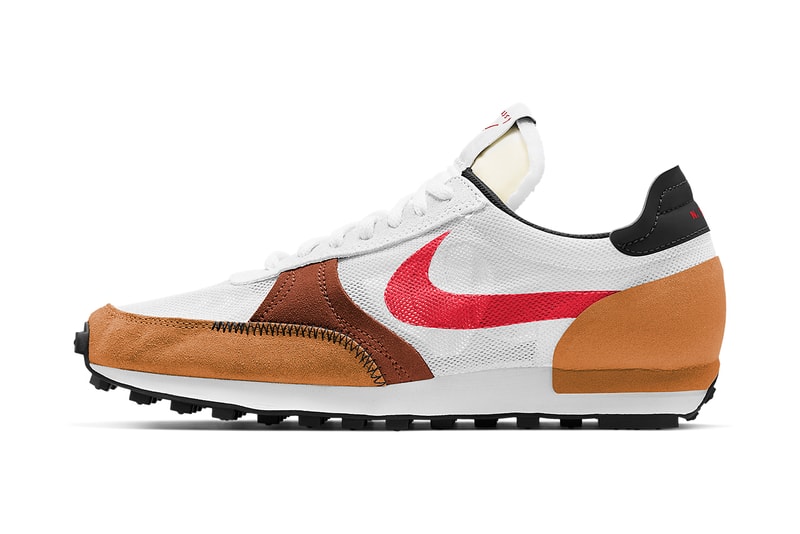 If you’re looking for Nike sneakers that sport modern and conceptual-inspired aesthetics, then Nike‘s N. 354 sub-label has got you covered. For this Swoosh family, one of its strongest silhouettes to-date has been the Daybreak Type — a fresh take on the original Daybreak — which has just surfaced in a brand new colorway that merges bright accents with earthy accents.

Between the its neutral-toned backdrops and amalgamation of lively accents and earth-toned overlays, this particular pair almost evokes emotions of Tom Sachs‘ highly sought after Mars Yard 2.0 shoe. Mesh uppers allow a clean white tone to do most of the talking, and come neighbored by vivid red Swooshes and Nike N. 354 branding atop the tongues and heel tabs. Seated next to these, muted beige browns spill onto the forefoot and heel overlays — the latter of which slightly bleeds onto the midsoles — while a dark brown panel is positioned towards the mid-foot. Tongues are splashed with a vanilla-like hue for an additional sprinkle of contrasting.

Bottom sections proceed with grayscale allure by being fashioned with angelic midsoles and black waffle treading.

While these have sold out in Asia, it’s likely that they will drop stateside via Nike and select retailers for the usual $90 USD.

Elsewhere in the world of kicks, a detailed look at the Nike Dunk High “Dark Sulfur” have surfaced.