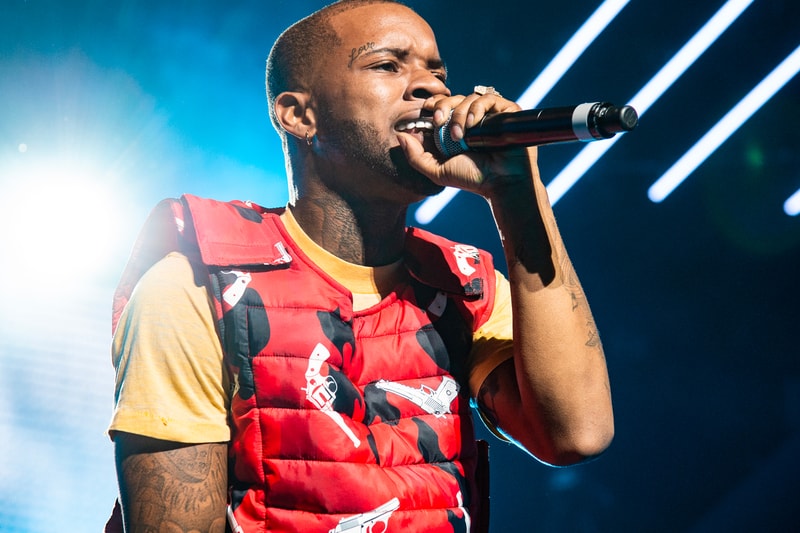 UPDATE (October 9, 2020): After being charged with two counts of felony assault by the Los Angeles County District Attorney’s Office for his involvement in the July 12 shooting of Megan Thee Stallion, Tory Lanez has released an official statement. The Toronto rapper, born Daystar Peterson, took to Twitter after breaking his silence with his highly controversial album DAYSTAR, which he released September 25.

The brief tweet hardly gets into any specifics nor does it explicitly proclaim his innocence. Tory’s statement reads: “[Time] will [tell]… and the truth will come to the light… I have all faith in God to show that… love to all my fans and people that have stayed true to me and know my heart… a charge is not a conviction. If you have supported me or Meg through this, I genuinely appreciate you.”

Continue below for more details about the official felony assault charges brought upon Tory by the Los Angeles County District Attorney’s Office. Stay tuned for more updates as this story is developing.

⏰ will ? … and the truth will come to the light … I have all faith in God to show that … love to all my fans and people that have stayed true to me & know my heart … a charge is not a conviction . If you have supported me or meg thru this , I genuinely appreciate u .

ORIGINAL STORY (October 8, 2020): Tory Lanez has officially been charged with shooting Megan Thee Stallion during an incident that occurred on July 12, 2020.

According to reports, the Los Angeles District Attorney’s Office charged Lanez with two felony counts of assault with a semiautomatic firearm and carrying a loaded, unregistered firearm in a vehicle. Prosecutors state that the Canadian artist, real name Daystar Petersen, “inflicted great bodily injury” on the Houston rapper, whose real name is Megan Pete.

The July 12 incident supposedly stemmed from an argument between Megan Thee Stallion and Lanez inside an SUV in Hollywood Hills. Witnesses told authorities that shots were fired and that the vehicle drove off after the argument erupted, and authorities four shell casings were located outside of the home where the altercation occurred. Megan then revealed that she was recovering from gunshot wounds to the foot, confirming that she was not arrested and that it was “a result of a crime” committed against her.

The Houston Rapper didn’t name her shooter until over a month later when she took to social media to claim that Lanez shot her. “Yes this n***a Tory shot me. You shot me. And you got your publicist and your people going to these blogs lying and sh*t. Stop lying. Why lie? I don’t understand. I tried to keep the situation off the internet, but you dragging it. You really f*ckin dragging it,” she said on Instagram Live. “Everybody in the car — there’s only four motherf*ckers in the car: me, you, my home girl and your security. Everybody in the car arguing. I’m in the front seat, this n***a in the backseat. I get out the car, I’m done arguing… I’m walking away. This n***a, from out the backseat of the car, starts shooting me! You shot me!”

She continued to explain that her fear of law enforcement caused her to initially claim that she was cut by glass. She added, “Soon as the police tell us to all get out the motherf*ckin’ car, the police is really aggressive. You think I’m ’bout to tell the police that we, n***as, us black people, got a gun in the car?”

Lanez broke his silence in late September by releasing his album DAYSTAR, where he directly addressed the allegations. He claimed that he and Megan Thee Stallion were more than friends, and categorically denied shooting her in the foot with the lines, “Gotta see a couple questions/ How the f*ck you get shot in your foot, don’t hit no bones or tendons?/ How the f*ck your team is trying to pay me in some whole millions?/ I just lost like $10 million dollars because this cold business/ But I got like 10 million followers that’s gon’ roll with me/ Fans that support me because they know my heart.”

Lanez will be arraigned on October 13 in Los Angeles and faces a maximum sentence of approximately 23 years if convicted. Prosecutors are suggesting a $1.1 million USD bail at his arraignment.