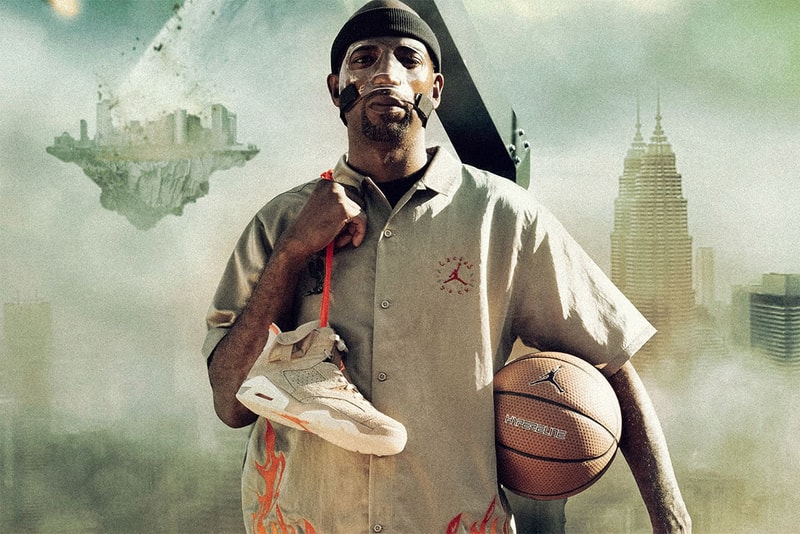 You’ve got to tip your hat off to Travis Scott and his team as they’ve racked up a number of impactful collaborations throughout various intersections of pop culture including that of a partnership with Fortnite, an apparel collection and personal meal with McDonalds, a footwear collab with Playstation, and more. His most exciting projects are arguably the ones he takes on with Jordan Brand, and for the launch of his anticipated Air Jordan 6 “British Khaki”, the H-Town native has tapped NBA legend Richard “Rip” Hamilton to model the latest kicks and its accompanying apparel.

This is simply another striking team-up to add to his already impressive sneaker campaign portfolio as he’s previously summoned Randy Moss for the Air Jordan 6 “Olive” makeup, and actor Mick Foley for his Nike Air Max 270 React collaboration. In the promo video shown below, the former Detroit Pistons baller is shown isolated on a basketball court in the middle of a desert while rocking the collection’s heavy duty utility vest, hoodie, pants and of course the kicks. Avid basketball fans know that “Rip” was known for wearing a face mask during his playing days on the hardwood, and the Cactus Jack team made sure to capture a moment of him slipping it on prior to swish-ing in a free throw.

Ahead of the April 30 official release of the latest Travis Scott x Jordan Brand collection — which is also La Flame‘s birthday — “Rip” sat down with the Jumpman team to talk all things relative to his career, starring in this campaign, the mask and more, and that can be viewed here.

Elsewhere in the realm of the ASTROWORLD artist, Travis also dropped Motocross-inspired apparel to coincide with his early shoe raffle.