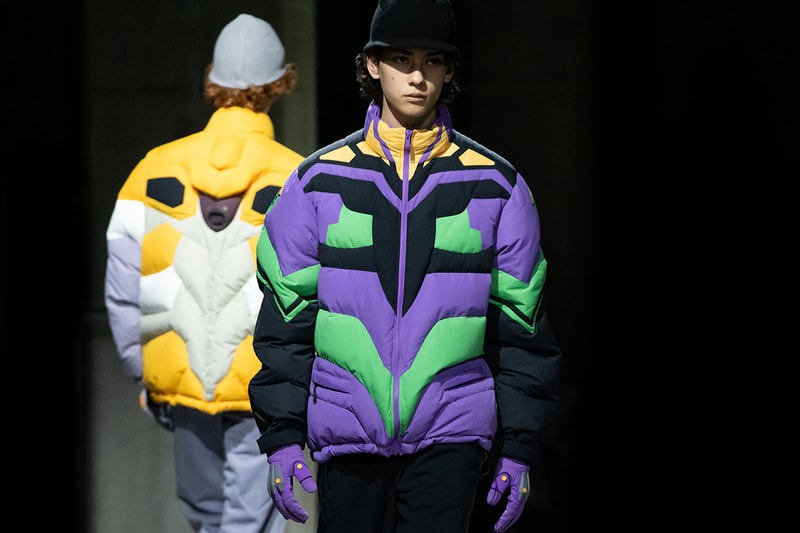 UNDERCOVER‘s far-ranging collaborations with pop culture franchises has seen the long-running Japanese brand honor everything from Akira Kurosawa’s Throne of Blood to Stanley Kubrick’s estate and Public Enemy, to name merely a few past nods. As part of its expansive Fall/Winter 2021 collection — which also features Markus Akesson’s artwork — the Japanese brand is joining up with ultra-popular anime franchise Evangelion, serving up a variety of thematic apparel indebted to the heady, psychological mecha series.

Of course, FW21 womenswear looks are on hand, accompanied by some new angles of UNDERCOVER’s forthcoming Nike Dunk collaboration, but the real showstopper of this presentation, dubbed “CREEP VERY,” is a series of outfits drawn directly from Hideaki Anno’s Evangelion that tie in neatly with the franchise’s long-awaited final film, Evangelion: 3.0+1.0.

Even casual fans of the series will find plenty of recognizable designs on display here, ranging from parkas inspired by the giant Evangelion Units and the Plugsuits worn by pilots like Shinji Ikari, Asuka Shikinami Langley and Rei Ayanami. Paneled puffer jackets bring the robotic creations to life, while several black parkas, coats, bombers and jackets feature colorful prints of the characters and their robotic counterparts.

The Evangelion collaboration only encompasses a portion of the lineup, as the majority is dedicated to Jun Takahashi‘s latest womenswear presentation, though it does kick off with a series of genderless trompe-l’œil pajama sets. Womenswear ranges from the borderline couture — jackets and puffers laden with dense layers of fabric pressed and creased to resemble flowers — to comparatively casual items that include layered coats, lapel-less jackets bolstered by fleece sleeves and various jacquard sweaters, many realized with one of UNDERCOVER’s frequent motifs: a delicate rose.

“It is the hope we have for what lies ahead of our daily worries and anxieties,” said Takahashi in a statement about the collection. “It is a worldview created for those individuals in the today’s society that live each and every day with constant conflicting emotions. It’s a different perspective from that of clothing design, but it would be an honor to have you feel and understand this.”

Ahead of its Rakuten-hosted runway show, UNDERCOVER launched a new web store on the digital Japanese shopping platform.